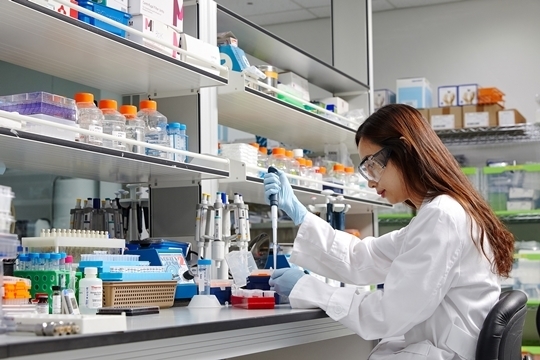 As nations battle over access to a potential COVID-19 vaccine, Korea is under pressure to secure its share. But as some nations cut corners, the government says it won’t sacrifice safety in its quest for a solution.

Currently, the Ministry of Food and Drug Safety has approved two clinical phase 1 2/a trials of COVID-19 vaccines in the country. One is American company Inovio’s INO-4800 being tested here by the International Vaccine Institute and the other is Genexine’s GX-19. The much talked-about SK Bioscience is still carrying out animal testing for its protein-based vaccine. It is slated to begin human trials starting in September.

Realistically, SK Bioscience’s vaccine is not going to be ready for the market until the end of 2021, by which time COVID-19 may not be so prevalent or pose an acute threat to public health. The same can be said of the INO-4800 and GX-19.

Elsewhere, global players are making strides in the race. AstraZeneca, Pfizer and Moderna are among the leading pharmas whose vaccine candidates are already in final phase of human trials. And nations are moving quick to pick up as many doses for its people as possible.

All in all, just looking at the US, the country has agreed to give a combined $4.67 billion for vaccines so far.

Korea, on the other hand, is yet to sign any deals for vaccines in dose forms that can be administered to people.

The deal SK Bioscience clinched with AstraZeneca in July is to contract manufacture the latter’s vaccine here in Korea. Having the drug in its raw form does not translate to inoculation shots available for the people here. In order for that to happen, the government must strike a separate deal.

An official from the Ministry of Health and Welfare told The Korea Herald that while the government is contacting various companies, including Pfizer and others, it is premature to make an official announcement.

The Korean government has assigned an extra 49 billion won ($41.3 million) budget for two-track approaches to COVID-19 vaccines -- to fund domestic developments of vaccine and to buy overseas vaccines if needs be.

South Korea, having joined the global vaccines initiative of COVAX Facility, has assurance to a supply of vaccine doses sufficient to immunize 20 percent of the country’s population. Immunology experts advise 60 percent to 70 percent of population to be inoculated for full protection.

Experts, meanwhile, also caution against the speed at which vaccines are being developed.

A viable vaccine usually requires an average of 10 years’ development to ascertain its safety, according to a SK Bioscience official.

In a normal setting, some thousands of healthy people are tested the vaccine through three phases of clinical trials. This is both to check the drug has no side effects, and to validate the drug’s long-term efficacy against the targeted virus.

Russia’s announcement Monday that it has approved a domestically approved COVID-19 vaccine, before the drug even finished testing, drew criticisms for overly hasten development.