Yoo Hye-kyung, 76, discharged herself from a hospital a day early to participate in a rally on Wednesday in Seoul to demand full compensation for her 500 million won ($450,000) investment in Optimus Asset Management.

Claiming that she hadn’t even heard of the hedge fund manager when she signed a contract with NH Investment & Securities, a leading brokerage here, Yoo was furious that the investment was frozen, as she needed it to pay the remaining installments of her new apartment.

“I was told that the product is a 100 percent safe unless South Korea goes bankrupt,” said Yoo at the rally held to meet opposition lawmakers investigating troubled hedge funds here. “I was dealing with NH Investment, I had no idea that my money actually went to Optimus.”

The Optimus case is the latest in a series of alleged fraud scandals by registered hedge fund managers, who pooled money from investors looking for returns in the current low-growth, low-interest rate environment.

In Optimus’ case, some assets in its sales pitch -- trade receivables by companies engaged in state-led construction projects -- turned to have never been part of its investment portfolio.

Hedge fund managers from another troubled firm, Lime Asset Management, are also accused of misrepresenting its funds’ track record and embezzling fund investors’ money. Moreover, a series of failures to redeem funds due to botched investments has puzzled investors, including high-net-worth individuals.

Likewise, hedge fund investors’ money often went to less marketable assets like convertible bonds -- frequently without their knowledge -- or to scandal-hit US fund managers such as International Investment Group and Direct Lending Investments.

Opposition lawmakers estimate that over 5.6 trillion won of investments in local hedge funds have been suspended.

Gen2 Partners, a Hong Kong-based hedge fund firm’s KS Asia Absolute Return and KS Korea Credit marked 1.09 trillion won. Since the company was established in Jersey, a self-governing UK dependency in the English Channel that acts as a tax haven, it becomes nearly impossible to look in the profit model, even for the Korean financial authorities.

Financial authorities are under siege as the lack of a safety net for individual investors in hedge funds has come into the spotlight.

They are set to inspect more than 10,300 local hedge funds and 233 hedge fund operators over the next three years, but some critics say this will not be fast enough to prevent further losses.

Like Yoo, many investors are retirees, some in their 90s, who invested most of their savings in these products, trusting the major brokerages and banks who sold them, instead of fully understanding the basis of the contract that the products carry massive risks.

Authorities and investors are blaming sellers. The Financial Supervisory Service, a financial watchdog established a bad bank in May to help companies recoup their losses from the troubled funds sold by Lime Asset Management, despite obvious reluctance by the banks who sold the products.

Authorities have pressured NH Investment, which sold 80 percent of the investments in Optimus, to return losses inflicted by the hedge fund, but the company appears to be resisting.

Pushing back at regulators, NH Investment CEO Jeong Young-chae told reporters on July 2 that the company may have acted unethically, but did not breach any legal standards.

As part of a drive to nurture a Korean-version of globally well-known hedge fund operators, such as Elliott Management, Asia’s fourth-largest economy began to induce more people to open hedge funds -- by lowering the bar to start one five years ago.

Under the revised law, any investor with at least 100 million won at hand is free to invest and hedge fund managers do not require a government license to register the business.

More financial professionals have since taken advantage of the new opportunity, where they can enjoy looser oversight and reporting rules, in order to allow them to carry out more flexible and speculative investment practices to maximize returns, while passing some of the risk off to investors. As of end-2019, the number of hedge fund managers had risen more than tenfold to 217 in less than five years. The combined net asset value of hedge funds rose more than doubled over the cited period, to 416.46 trillion won.

Under Korean rules, hedge funds are defined as private funds -- composed of no more than 49 investors -- which could leverage up to 400 percent of the fund’s net assets to invest in equities, short-term financing instruments, derivatives, real estate and infrastructure, among other assets.

Hedge funds differentiate themselves from another form of pooled funds, private equity funds, in that hedge funds can exercise no more than 10 percent of voting rights of a company, are allowed to extend corporate loans, and usually offer investors shorter maturity periods.

However, Korea is a difficult place to carry out and test hedging strategies in equity investment, with the result that their overall investment approach is different to their overseas peers.

According to the FSS, only slightly more than 3 out of 10 hedge funds were devoted to securities investment, indicating that almost 7 out of 10 are in other, less liquid asset classes.

“Many Korean hedge funds do not employ usual hedge fund strategies such as value-driven long-short strategies or event-driven strategies that capitalize on corporate events such as mergers and acquisitions,” said Auh Jun-kyung, assistant professor of finance at Yonsei University.

“(And) it is a tall order for hedge funds to adopt a quantitative investment strategy here due to taxation systems that levy taxes on each equity transaction, as well as a lack of professionals who can execute such algorithm-driven strategies.”

Particularly in terms of the popular long-short equity strategy, longstanding public disdain here against short selling has deterred hedge funds from taking short positions. Moreover, brokerage firms have been reluctant to lend securities to hedge funds. This forces brokerage firms dedicated to prime brokerage services to seek other sources of income such as total return swaps, in which an investing fund receives income and gains from an underlying asset in return for a fixed payment.

Moreover, naked short selling is illegal in Korea, meaning that hedge funds are not allowed to short sell securities without borrowing them beforehand. In addition, Korea has adopted regulations such as the uptick rule to prevent investors from short selling stocks at a lower price than the previous trading price.

This has forced Korean-style hedge funds to turn to assets that are illiquid and less marketable, and in some ways, that was what Korean authorities intended. 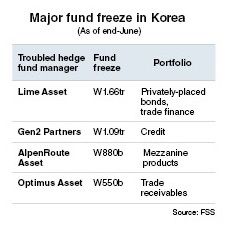 In 2018, financial authorities urged more hedge funds to tap into risky capital to stimulate the growth of small companies with low creditworthiness via mezzanine instruments they issued.

While mezzanine products like convertible bonds could be a decent source of funding to companies that are often unable to issue investment-grade bonds, hedge funds may lose principal if the target companies default or see their values plunge.

This applies when a hedge fund uses a strategy that exploits the difference in yield between long- and short-term bonds: If the long-term yield drops suddenly, it can damage the fund’s returns and may cause liquidity problems. This is thought to be the key source of losses for Hong Kong-based hedge fund Gen2 Partner, which mainly attracted Korean capital through retail investors.

“Often, hedge fund contracts fail to clarify their investing principles. This makes it hard (for managers) to identify moral hazard,” said Kim of Handong University. He said that with a lack of risk management experience and suitable financial instruments, there is a danger that managers will be tempted to take more risks than they should, knowing that they will get a bonus if the risks pay off, and the customers will bear the cost if they do not.

“Such greed-laden risk-taking is far from a hedging strategy,” Kim added.

In response to the fraudulent schemes that began to unravel over the past months, Korean regulators have ramped up oversight on all parties concerned, including hedge fund managers, private banking networks of financial institutions and fiduciaries. Authorities in June also vowed to carry out an all-out inspection on all privately pooled funds.

Through law revisions, authorities are seeking to enhance internal control of hedge funds, mandate external audits by a third-party auditor and increase the capital requirement to cushion investors’ losses.

But this policy direction, however, is not only insufficient, but also misleading, experts said.

Some experts argue the stricter auditing rule on pooled funds is pointless, given that this will interfere with the normal hedge funds’ unique qualities. They also argue that such oversight is unlikely to prevent hedge funds from failing to fully disclose risks to the investors.

“In order to take full advantage of their investing strategy, hedge funds often invest in illiquid assets whose price discovery is difficult. In this respect, the government’s plan to ramp up oversight on hedge funds’ portfolios sounds far from practical,” Auh said.

The rule might also suppress hedge funds’ uniquely flexible operations, under which they do not need to follow a standard methodology when calculating performance.

“There is room for advancement and the hedge funds’ growth should not be suppressed in spite of recent undesired events.”

In the United States, hedge fund managers are given room for flexible investment management, but have a stronger fiduciary duty. Also, registered investment professionals are required to disclose their background, qualifications and disciplinary history within the securities industry, via Form ADV.

In order to encourage hedge funds here to adopt a stricter investment discipline and prevent their breach of fiduciary duty, a more draconian rule to penalize fraudulent hedge funds might be needed, as seen in the high-profile Bernie Madoff fraud case that saw him sentenced to 150 years in jail.

“Korea may choose to adopt stricter measures such as punitive actions on the wrongdoers and allow victims to implement collective actions,” said Song Hong-sun, a senior research fellow at financial think tank Korea Capital Market Institute. “It seems desirable to toughen the capital requirement on private funds where retail investors are involved.”