Amid a selling spree by foreigners, individual investors are scooping up tech stocks awaiting a rebound, but experts call it risky

Past experience of the local stock market’s dramatic rebound -- led by the memory chip market boom -- and pervasive advisory reports by local analysts, led many individual investors to jump on the bandwagon.

The stock prices are really appealing now, but is it worth it?

According to the stock market operator Korea Exchange (KRX), the share price of market bellwether Samsung Electronics which hit 62,800 won ($50.50) on Jan. 20 -- when the country confirmed its first COVID-1 case -- crumbled to 46,700 won during Tuesday’s trading session.

The nation’s No. 2 chipmaker SK hynix also hit its highest price this year on Feb. 17 at 106,000 won, but dipped to 77,000 won on the same day when Samsung Electronics’ stock price crashed.

And there are many who already have cleared their shopping list.

But individuals scooping up tech stocks could be risky and the prices have not bottomed out yet, some experts warned.

“As demand outlook is not clear (which is likely to deteriorate) and headwinds may not go away for a while, the worst has yet to come. Speaking of my sector, I’ve told my investors to get out (from the market). I’ve put underweight ratings on that (sector) for obvious reasons. I’ve either reduced ratings or downgraded a whole bunch of firms in the last couple months,” he added. 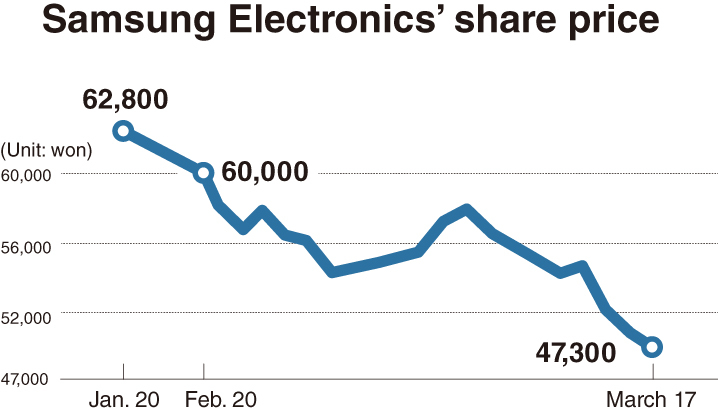 Until last week, most of the local brokerages’ target price for Samsung Electronics and SK hynix were same as before the novel virus outbreak occurred. However, some securities firms have suddenly lowered their target prices amid the possibility of losses.

Hana Financial Investment lowered its target price on Samsung Electronics to 63,000 won -- down 4,000 won, or 5.97 percent. It also changed its best pick in the sector to SK hynix, presuming Samsung Electronics’ IT, mobile and consumer electronics fields will likely underperform.

But they recommend investors to “buy” stocks, predicting that the stock prices will rebound once the virus outbreak gets eased. At the same time, they presume that the server memory market will benefit from the outbreak, due to telecommuting and “untact” culture. “Untact” refers to the trend of minimizing face-to-face contact.

“Due to concerns over the slowdown in semiconductor demand, we’ve lowered our consensus, but it is not far off from our forecast given before the COVID-19 virus outbreak,” said Choi Do-yeon, an analyst at Shinhan Investment, expecting profit gain from the second quarter.

“Amid the coronavirus outbreak, dark clouds are hanging over the global economy. No one in the industry can be free from it,” said Lee Seung-woo, an analyst at Eugene Investment and Securities. “In the meantime, ‘winner’ and ‘loser’ sectors will be divided. In this aspect, investors need to focus on the semiconductor industry.”

Meanwhile, some offshore market experts warned that “it is not yet the time to do bottom-fishing in the tech equity market,” not just in Korea but globally.

Nomura Securities downgraded its forecast for the global semiconductor industry from $437 billion to $429 billion -- down from 6 percent growth to 4 percent. JP Morgan also predicted that the industry will have a negative effect amid the COVID-19 virus.

The Bank of America also downgraded the industry to “underperform” from “buy,” predicting lower memory chip sales due to the virus woes.