As of December, major global organizations and policy institutes here forecast that Korea’s economic growth pace for 2020 will be in the 2.2-2.4 percent range.

While the International Monetary Fund suggested a conservative 2.2 percent, the Bank of Korea, the Korea Development Institute and the Organization for Economic Cooperation and Development expected 2.3 percent growth. The Ministry of Economy and Finance, connoting its policy drive for economic momentum, raised the forecast to 2.4 percent.

The updated economic outlooks at year-end were generally seen as reflecting optimism that “the economic rock bottom is now over” for Asia’s fourth-largest economy.

Cited as plausible risks down the road were the high level of household and sovereign debts, the upcoming US presidential election and Korea’s parliamentary elections slated for April.

It was, however, the unexpected appearance of the novel coronavirus and the resulting COVID-19 followed by its escalation into a global pandemic that acted as a threat to Asia’s fourth-largest economy.

Korea reported its first confirmed case on Jan. 20, but the epidemic spread remained relatively slow and contained -- until mass outbreaks among the religious sect Shincheonji hit the southern city of Daegu and adjacent North Gyeongsang Province.

Immediately recognizing the impact of community infection, Moody’s on Feb. 16 lowered its outlook for the country’s economic growth this year to 1.9 percent, down 0.1 percentage point from the previous figure. After a three-week observation, it further dropped the outlook to 1.4 percent earlier this month.

In a related report, the credit ratings agency suggested that in the worst scenario, the growth pace could fall to as low as 0.8 percent, depending on upcoming developments. 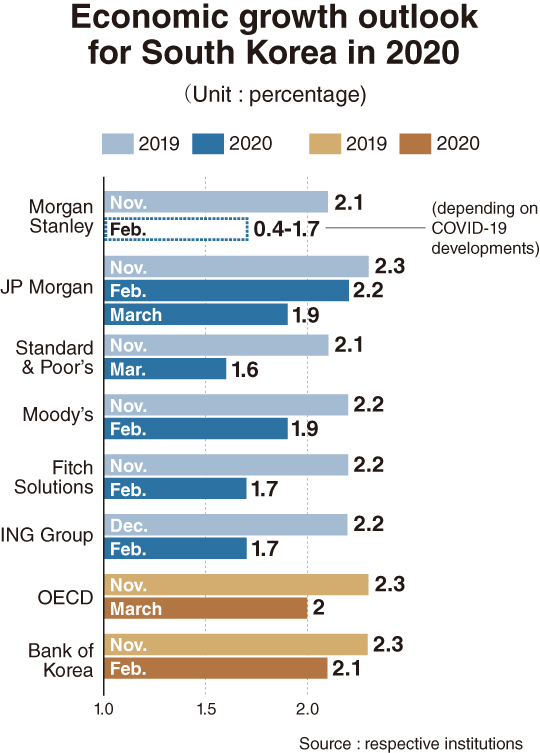 Standard & Poor’s also lowered its outlook successively from 2.1 percent to 1.6 percent in February, and additionally to 1.1 percent earlier this month.

The country’s consumer confidence index stood at 99.6 points last month, down 0.4 points from a month earlier, according to the OECD’s monthly data. This was the steepest drop among the 25 member states that had handed in related data.

A reading under 100 indicates that consumers have a negative outlook for the economy and employment situations.

In the light of the novel coronavirus outbreak, the US Federal Reserve delivered a surprise rate cut early this month, in its first emergency move since the 2008 global financial crisis.

The Bank of Korea did not immediately mirror the US Fed’s decision to slash its base rates by half a percentage point to a target range of 1 percent to 1.25 percent, but the nation’s central bank strongly hinted at a possible rate cut in the near future. It held an emergency meeting presided by BOK Gov. Lee Ju-yeol, mere hours following the US Fed’s announcement.

The rate cut brought the US benchmark rate to that of Korea as the BOK has been maintaining the interest rate at the record low of 1.25 percent since October. Its seven-member monetary policy board, at the time, made its second rate cut in three months as the economy showed signs of a recovery.

Experts say that, at the moment, the BOK has little choice in lowering its policy rate as soon as possible, as several of its global counterparts -- including Australia and the UK -- have boarded the bandwagon of base rate cutting.

There are also concerns that Korea may already have missed the chance to take relevant monetary moves, considering the prolonged impact of the globally spreading COVID-19.