#Sunmipop: 7 Songs to celebrate the best of Sunmi

Having debuted in 2007 as part of the four-piece Wonder Girls, the 27-year-old has been in the game for over a decade now. And since departing from JYP Entertainment in 2017 and going solo with a new label, she has churned out a number of quality pop bangers.

With a consistency in style and general catchiness, her songs have been both a commercial and critical success, creating a rather impressive discography within the space of just two years and giving birth to the term “Sumipop.” 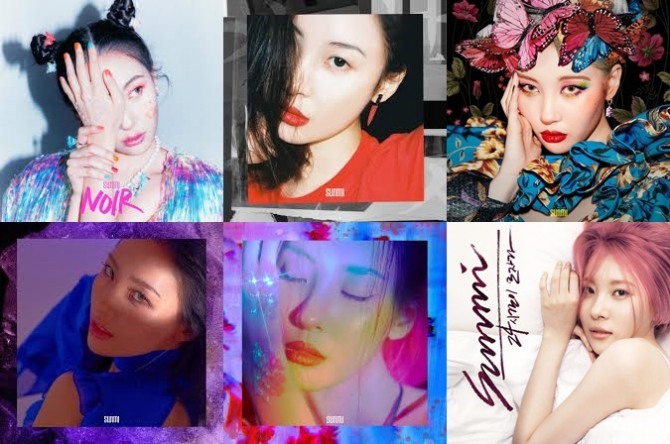 As the rising dance-pop queen sets the dance floor ablaze with her new single “Lalalay,” we look back on some of her best work over the years and how the tunes helped solidify her place in the music scene.

The 2013 track “24 Hours” marked the beginning of Sunmi’s glorious solo career. While still under the roof of JYP Entertainment, the Wonder Girls member became the first from the group to release solo work.

The catchy dance tune visualizes the intense feelings of being in love with the aid of the lyrics while the tango interlude adds a layer of drama.

It was clear that CEO and producer Park Jin-young put a great deal of effort into Sunmi’s solo debut, as the single was described as the “the very first project in 13 years that Park Jin-young went all in on,” since Park Ji-yoon’s “Coming-of-Age Ceremony,” a huge 2000 hit that saw the former JYP artist shock the public with her sexy images.

As a producer, Park Jin-young oversaw everything about the single, from the dance and music to the video and choreography. The release also marked the end of a nearly four-year hiatus, after she decided to leave the group temporarily in 2010.

In a 2013 interview, Sunmi said though she was happy to have debuted with Wonder Girls, she found herself feeling no longer happy on stage as she went through the motions mechanically, and made the decision to take a break to change how she felt.

Sunmi was back with her eponymous EP and lead track “Full Moon” after just six months. The mid-tempo sax-tinged track featuring rapper Lena saw the singer establish her sound, and proved yet another commercial success.

Laden with jazzy beats, sensual guitar riffs and a catchy chorus in her delicate voice, the song brought the singer to the No. 1 spot on Gaon’s weekly download chart, as well as reaching No. 2 on the weekly Gaon Digital Chart.

The EP comes with a total of six tracks, including “Full Moon” and “24 Hours,” as well as duet songs “Who Am I” and “Frozen in Time,” which she recorded with Wonder Girls bandmate Yubin and Jackson Wang of GOT7, respectively.

Nearly 1 1/2 years after releasing the record in early 2014, Sunmi joined Wonder Girls again with their third studio album, “REBOOT,” returning after more than a five-year absence.

Soon after Sunmi parted ways with JYP, she moved labels and released what became undisputedly her most successful single to date -- “Gashina.” The mega hit single went on to rack up over 100 million views on YouTube and top charts on multiple major music shows, including “Inkigayo,” “Show Champion” and “M Countdown.”

Sunmi teamed up with The Black Label, a subsidiary of YG Entertainment, for the body-moving, beat-heavy synth-pop number with an Eastern sound and distinct rhythmic bass. While Teddy, 24 and Joe Rhee wrote the melodies, Sunmi took part in writing the lyrics.

It’s worth noting that the title is a bit of wordplay, as “gashi” means “thorn,” but “gashina” can also mean “Are you leaving?”

The lyrics make sure to take advantage of the double meaning. In one lyric, she asks, “Why are you leaving me who’s so pretty” while she fiercely warns in another lyric, “My thorns will dig deeper in you.”

Continuing her winning streak, Sunmi released “Heroine” less than half a year after mega hit “Gashina.” The second installment of her trilogy refused to be overshadowed by the previous single’s success. Serving as a prequel to its predecessor, the single describes a vulnerable situation a woman finds herself in as she experiences a relationship going south.

She once again wrote the lyrics and teamed up with The Black Label for the synth-heavy dance number, creating a retro disco sound that became a chart success.

In the video, which has been watched over 53 million times, she runs in the rain before abruptly falling to the ground. But the singer revealed during a press conference that what looks like grade A acting was not part of the script -- she actually just slipped. Later, she told the video director to include the scene as she liked the sadness in her accidental fall.

Sunmi released her second EP, “Warning,” in September 2018, wrapping up her warning-themed trilogy project that began with “Gashina” and continued with “Heroine.”

Lead track “Siren” gave the singer yet another certified chart banger, as it enjoyed a two-week reign on top of both the Gaon Digital Chart and Gaon Download Chart.

Her 2018 EP consists of seven tracks, with the lyrics of each song written by herself. She also helped write the melodies for a few tracks, including "Siren” written alongside Frants.

The singer said the track was once considered lead-single material for Wonder Girls around three to four years ago, but then ended up losing out to “Why So Lonely?” as the group at the time was doing band music and the song’s arrangement was not well suited.

Drawing inspiration from “Pirates of the Caribbean: On Stranger Tides,” the video breathes new life into the song.

An underwater scene is seen as a nod to single “Siren,” which refers not only to alarming sound, but also alluringly dangerous creatures from Greek mythology who seduced sailors to their eventual deaths with their sweet voices.

In the aftermath of the success of “Warning,” Sunmi was soon back in the music scene with “Noir” earlier this year.

The electronic dance number, co-written by Sunmi and El Capitxn, is packed with trendy yet retro elements such as 808 bass, psychedelic synth and disco drum beats.

Sunmi was taking a small break after promoting previous single “Siren” that she took advantage of by watching dark noir films at home, prompting her to reflect on social media, she said in an interview earlier this year.

And the video appears to poke fun at today’s social media obsession as she channels her inner attention seeker.

In one scene, she’s making a peace sign while livestreaming as a birthday cake burns behind her. While apparently cautious, Sunmi appears not to be afraid to take on heavy topics.

"I do feel like I may have opened a can of worms, but then I also wonder who else would have touched on the topic if not me?” she said during a recent interview with Melon.

The latest single from the singer sees the singer put a traditional spin on contemporary dance-pop, as the sound of the traditional Korean wind instrument taepyeongso, coupled with electro beats, heavily dominant throughout the track.

Sunmi co-wrote the song with DJ Frants, who she worked with on some of the tracks from the 2018 EP “Warning,” including “Addict” and “Black Pearl.”

Despite the song’s Korean influence, the singer said during a showcase event that the song was inspired by her passionate Mexican fans.

"The inspiration came while on tour. I went to Mexico with high expectations about their passion and fans were enjoying my show very passionately without caring about what other people think,” she said. “I was back in bed in my hotel room and thought about how Koreans also love to have fun.

Then the word ‘Lalalay’ suddenly sprung to my mind.” After searching on the internet, she learned the word was another name for the taepyeongso and suggested to DJ Frants they made beats with the instrument.

The song soared to the top of multiple daily streaming charts in South Korea including Melon and Bugs upon release.