By Hong Dam-young
Published : Sept 19, 2019 - 17:09       Updated : Sept 19, 2019 - 17:09
Over the last few years, fans have learned that Seventeen always goes above and beyond when it comes to them. In a familiar scene at K-pop concerts, when Seventeen said “jump,” the crowds jumped. When it requested screams, they offered frenzied roars. But that’s not all that made the 3 1/2 hour concert one of the best shows of this year so far.

Kicking off Seventeen’s “Ode to You” world tour, the concert took place at the KSPO Dome in Seoul on Aug. 31, the second day of its three-day run. The 13-piece band took to the stage with the boisterous “Getting Closer,” and its stage presence was captivating enough to make nearly 13,000 fans jump to their feet and stay there throughout the entire show. After whipping up the crowds with “Rock” and “Clap,” Seventeen briefly grabbed the microphone to ask, “Are you guys ready to blow off your stress?”

Delivering three of its best-loved hits “Thanks,” “Home” and “Don’t Wanna Cry,” Seventeen mesmerized fans with its highly synchronized dance movements and explosive energy. It also made sure to get intimate with fans by making full use of the extended stage.

As diverse as this multinational group is, its members formed three teams and showcased their talents in the areas of hip-hop, performance and vocals. Front-runners S.Coups, Mingyu, Wonwoo and Vernon switched up the mood by serving up upbeat hip-hop track “Trauma,” which was slightly altered with a thumping rock sound. The song was followed up by groovy “Chilli,” during which Mingyu charismatically commanded the crowds by belting out, “It’s time to scream!”

Hoshi, The8, Jun and Dino took the baton to showcase their artistry with “Lilili Yabbay,” which blended sensual melodies with seductive dance movements, as well as Moombahton-tinged “Shhh,” backed by aesthetically pleasing sets and impressive choreography. Allowing fans to catch their breath, vocalists Seungkwan, DK, Joshua, Woozi and Jeonghan toned the mood down with ballads “Hug” and “Don’t Listen.” Then, all the units reunited, reaching greater emotional heights with the poignant “Smile Flower.” It was a heartwarming moment, almost tear-inducing, as the band members crooned atop a beautifully lifted stage while affectionately gazing down on their fans.

“It’s been a while since we sang this song, right? I hope we can sing this song for you for the rest of our lives,” said S.Coups, leaving it to the fans to finish the song. Seungkwan and DK got overwhelmed and burst into tears as the fans showed their support with gentle clapping, not with screams this time. 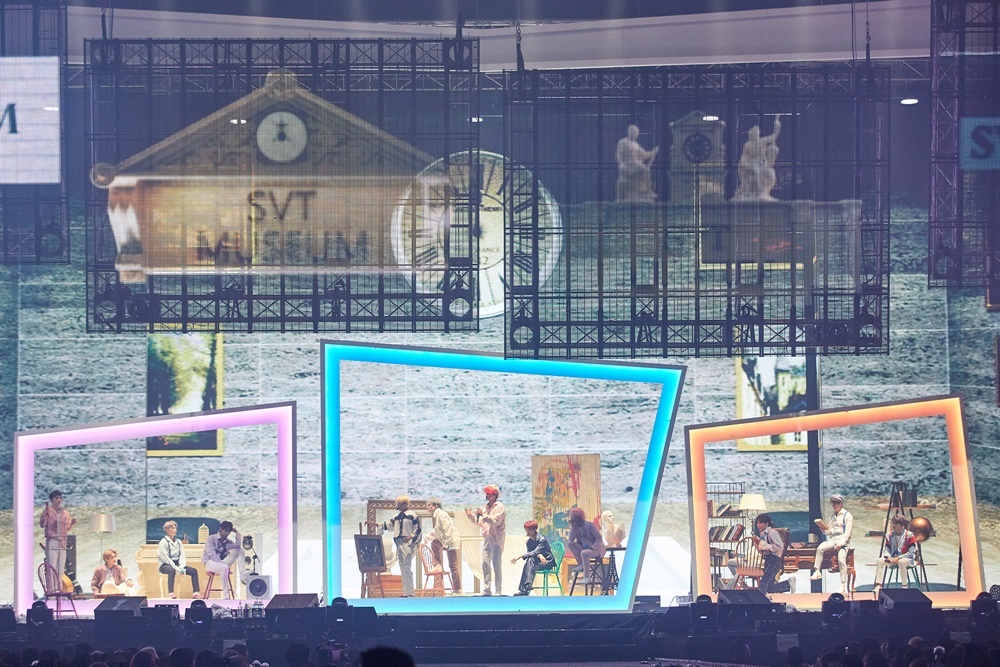 The emotion lingered after the performance, and Seungkwan joked as he wiped away tears: “My dry-eye syndrome is getting worse. I will visit the hospital with DK after this.” S.Coups backed him up, saying: “I think I get why we broke down in tears. ‘Smile Flower’ makes us think about a lot of things. We’ve been talking about a lot of things these days, but this song makes us forget about our worries.”

Of the fans singing along, DK said, “I really wanted to listen to your (the fans’) voices filling up the melody.”
Jeonghan added, “It’s a comforting song, and maybe Seungkwan and DK found their own comforts through it.”

After the tears, the rest of the night built up to a completely frenetic climax. The versatile act knew how to have fun with cliches, as the band members transformed into geeky musical actors for four of their most playful and quirky hits -- “Adore U,” “Pretty U,” “Oh My!” and “Just Do It” -- incorporating humorous Broadway-inspired elements. The born entertainers were showered with sweat, but their glowing faces showed that they were truly enjoying being onstage.

After performing “Crazy in Love,” “Good to Me” and the Korean version of Japanese single “Happy Ending,” Seventeen took some time to thank the celebrities who had come out to see the show: Eunhyuk of Super Junior, comedian Lee Guk-joo and DK’s fellow actors from the musical “Xcalibur.”

Seventeen finally put out “Hit” as the event’s official ending, but the fans all knew the show wasn’t over until they heard “Very Nice,” the iconic song that has traditionally rounded out Seventeen’s previous shows. It was a tacit agreement: Fans sang “campfire” for the act, Seventeen returned to the stage with “9-Teen” and “Holiday,” and the seemingly never-ending show ended with a “Very Nice” encore that lasted nearly 10 minutes.

“Carats,” said Woozi, addressing Seventeen’s official fandom community as he wrapped up the show. “You guys make me smile. We will work harder for you, to make you smile and shine brighter.”
Joshua said, “Back when I used to sing in the church choir, I used to feel really nervous. But now, thanks to you guys, I’ve gained confidence. Thanks to you, my mom also told me that she feels proud of me.”
“You guys and us, we share such a strong bond that it makes me think that I can trust you and share my deepest concerns. Please know that we love you and care about you more than anyone else. Let’s keep going through thick and thin together,” said S.Coups.

Having wrapped up its Seoul gig on Sept. 1, Seventeen is set to drop its third full-length album, “An Ode,” Sept. 16.