[Herald Interview] Living the Korean dream at the pool table

This is easy to believe from Sruong Pheavy, the Cambodian-born Korean billiards star. She had absolutely no reason to believe she would become the women’s three-cushion champion in South Korea: She had never grabbed a cue before coming here.

Pheavy, 29, came to Korea about 10 years ago to marry her husband, Kim Man-sik. Kim, twice her age, runs a small printing shop in Cheongju, North Chungcheong Province. Like so many couples where the husband is Korean husband and the wife is from Southeast Asia, they met through a marriage broker. 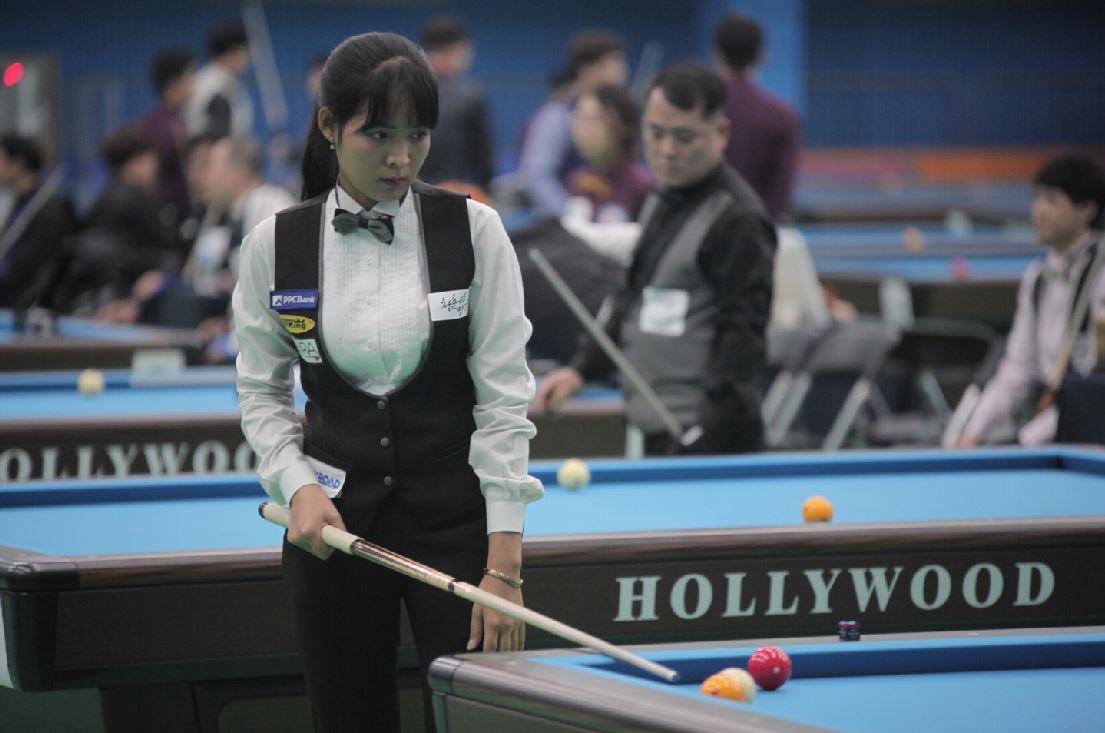 Pheavy grew up in the rural village of Kampong Cham in Cambodia, five hours’ drive from the capital city, Phnom Penh. She had to quit school at a young age to help on her family’s potato farm.

Like many other Southeast Asian brides, Pheavy found her first year in Korea dull. With no friends or family here and with only a marginal understanding of the local language and culture, the most she could do was help her husband run the print business or handle household chores.

Then in 2011 came a life-changing encounter.

She accompanied her husband on his daily visit to a billiards club and picked up a cue for the first time.

“I was so good at it. All the guys in the room surrounded the table and looked at me in awe,” Pheavy told The Korea Herald in a recent interview in Suwon, Gyeonggi Province.

“People asked me if it was my first time playing. It was. I had never seen a pool table in Cambodia,” she said.

Kim immediately recognized the exceptional talent Pheavy would have for carom, a type of billiards played on a table with no pockets.

“My husband told me, ‘I will take care of the house. You should learn to play billiards,” she recounted.

Pheavy’s talent for the sport was exceptional. In an amateur competition in 2013, she took second place, an astounding achievement for someone with less than two years’ experience.

Through the event, she was picked up by Billking Korea, a local billiard supplies brand, which offered to support her in pursuing a professional career.

Pheavy debuted as a professional in January 2017, and before the year’s close she placed atop the Korean carom three-cushion player rankings.

But she couldn’t compete in global competitions because she was a Cambodian national and her home country did not have a federation for billiards at that time to make her eligible for international leagues. As Pheavy’s reputation grew, Cambodia took greater interest and founded a federation in June 2018.

In September that year, Pheavy proved it worthwhile by taking third place at the World Championship in Turkey.

With her success on the blue baize, Pheavy has enjoyed great popularity in her home country too. To Cambodians, she has become what figure skating champion Kim Yu-na is to Koreans.

To pay back the love she receives, Pheavy hopes to build a school in Cambodia. She recently bought a 9,920-square-meter plot of land and is looking to buy more for the project.

“I believe education is the most important thing for Cambodia now,” she said.

In January this year, Pheavy donated 10 million won ($8,540) worth of anti-parasitic drugs, along with stationery, computers and monetary donations, to an elementary school in her hometown with prize money she had saved.

She put all the money in a special bank account to later use for Cambodia. It was her husband’s idea, she said. The prize money does not amount to much compared with the men’s league.

“I believe in giving back. It is important to not let my head get too big. I should always try to look back,” she said.

Pheavy hopes to serve as a bridge between Cambodia and Korea. Recognized as such, she was invited by President Moon Jae-in to a Korea-Cambodia economic forum held in Phnom Penh during the Korean leader’s visit in March.

As a migrant woman herself, she is aware of difficulties that face foreign wives here.

In 2011, Pheavy felt unsure about taking a five-hour flight to marry a Korean man she hardly knew.

“Of course I wanted to marry someone that I love. But I accepted my fate. My grandfather told me, ‘You will meet someone nice because you are a nice person.’ That really encouraged me,” she said.

“There isn’t really someone who is as strong as my husband. I meet a lot of people these days. Though they may seem nice at first, I realize that they are much weaker than my husband in their hearts,” she said.

Pheavy has a tight schedule ahead of her for the summer, packed with competitions in and out Korea. She says it is hard for her to focus solely on preparations with all the interview requests and other extra activities.

“But still, it is fun. I get to meet people and experience new things, which I could have never imagined,” she said. “To me, Korea is a land of opportunities. If I try hard enough, my efforts will pay off.”