By Sohn Ji-young
Published : May 29, 2019 - 15:07       Updated : May 29, 2019 - 16:52
South Korea’s global competitiveness ranking dropped one place this year, amid an economic slowdown hit by reduced exports and capital investments, an annual report by a Switzerland-based international institute showed Wednesday.

The International Institute for Management Development said in its report that Korea ranked 28th in terms of world competitiveness among the 63 countries surveyed. It was ranked 27th last year.

The institute, since 1997, has been ranking economies based on four categories: economic performance, government efficiency, business efficiency and infrastructure. 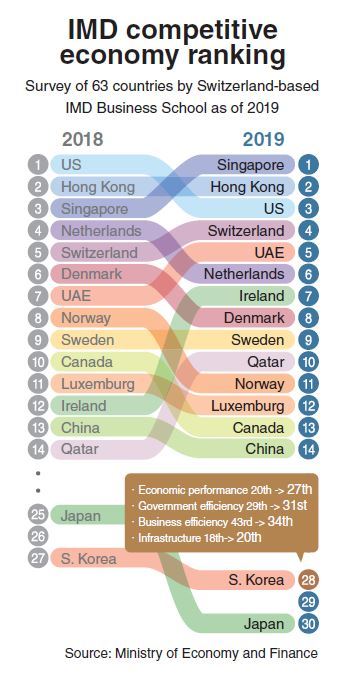 In terms of economic performance, which covers the domestic economy, international trade and employment, Korea placed 27th, down seven notches from a year earlier.

Korea’s economy grew 2.7 percent in 2018, down from a 3.1 percent growth achieved the previous year. In the first quarter of the year, it shrank 0.3 percent on-quarter, owing to a sharp drop in exports and investments, according to the Bank of Korea.

In terms of infrastructure, Korea fell two places to 20th due to a decline in the technology and education categories. Its standing in terms of government efficiency dropped two notches to 31st this year as well.

As for business efficiency, Korea stood at 34th place, moving up from 43rd a year earlier on the back of improved labor market and entrepreneurship.

By region, Korea placed ninth in global competitiveness rankings among 14 countries in the Asia-Pacific region. Among 28 countries with a population of more than 20 million, it ranked 11th.

Overall, Singapore was ranked as the world’s most competitive economy, surpassing Hong Kong (second) and the US (third) for the first time in nine years, according to the IMD World Competitiveness Rankings.

The city-state’s rise to the top was driven by its advanced technological infrastructure, availability of skilled labor, favorable immigration laws, and efficient ways to set up new businesses.

Other East Asian countries also saw a drop in their rankings. China fell from 13th to 14th place, while Japan went down from 25th to 30th place, according to the IMD.


On top of a drop in global competitiveness rankings, Korean companies’ outlook for their business conditions in the coming month worsened, BOK data showed Wednesday, hinting at growing concerns over downward risks to the economy.

The business survey index of Korean businesses came to 73 for June, down from 77 recorded for this month. A reading below 100 suggests that pessimism prevails in terms of future business outlook.

The latest readings were based on a survey of 3,172 companies, conducted from May 14-21, according to the BOK.

Reflecting the pessimistic outlook, the BOK said Tuesday that Korea’s consumer sentiment index fell in May for the first time in six months due to a slowing economy, volatile stock market and concerns over the escalating trade war between the US and China.

The CSI -- which measures consumers’ optimism about the economy -- came to 97.9 for May, down 3.7 points from the previous month. It marks the first decline since November 2018, when it fell to 95.7, according to the central bank.