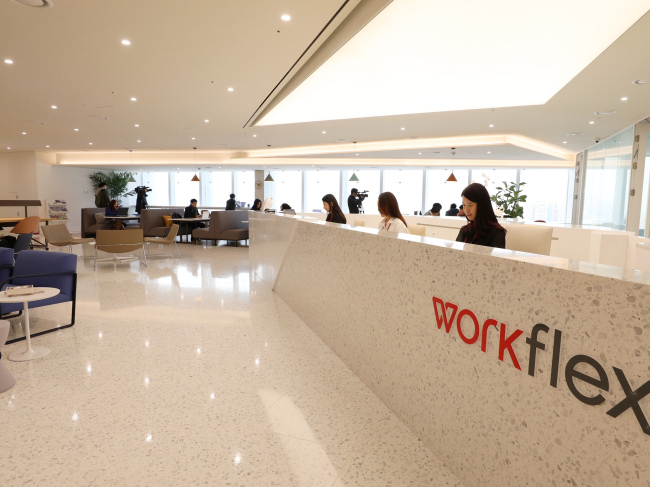 1.  Coworking space on the offensive

[1] Upon entering the 30th floor of the 123-story Lotte Tower, the tallest building in Korea, visitors encounter a spacious and sleek office with people working on laptops on sofas, at desks or in glass-walled private rooms.

[2] Boasting a stunning panoramic view of Seoul, the venue has an atmosphere that is both relaxing and business-like -- unlike traditional offices.

It is called Workflex, a premium coworking space launched in February by construction firm Lotte E&C with the aim of providing a snug nest for entrepreneurs and startups who want both security and class.

[1] Lee Jae-woong, founder and CEO of car-sharing app SoCar, said the latest deal struck by taxi unions and car-sharing service providers may set a bad precedent as it appears to restrict business activities already allowed under the current law.

After a monthslong dispute, an agreement was reached Thursday among the government, lawmakers, taxi companies and car-sharing firms to allow a car-sharing service for four hours daily on weekdays, in a move that hopes to end protests from taxi drivers claiming Kakao’s service would destroy their livelihoods.

[2] On Thursday afternoon, Lee wrote in a Facebook post that the agreement encompasses business activities already allowed under the current law and further restricts the car-sharing business.

“What was reached under the grandiose name of ‘Social Great Compromise Organization’ is to allow car-sharing services, which are (already) allowed at rush hour for two hours from 7 a.m. and for two hours from 6 p.m. during weekdays,” Lee said.

“Although President Moon Jae-in said he wants to deal with regulations by allowing (businesses) unless they are banned under the law, (the latest) deal restricts business allowed under the law. This may set a bad precedent,” he added.

Companies providing paid car-sharing services have already pulled out of Korea, with the exception of Poolus, which recently started offering its services free-of-charge, according to the CEO.

[3] He said he doubted whether this compromise could really be called a compromise for both car-sharing services and taxi companies.

“It would have been better if the government had allowed a softer landing, by for instance, allowing paid car-sharing services by setting a limit on numbers,” he said.