“I couldn’t really check the fare table hung at the front seat, as I was in a hurry, but I’m not sure the calculation was right.”


The basic taxi fare in Seoul has increased from 3,000 won to 3,800 won, as of Saturday 4 a.m., but many taxi drivers and passengers appear to be having difficulties calculating the new fare, as most taximeters have not been updated yet.

According to the Seoul Metropolitan Government, only 80 of 72,000 taxis had updated their meters over the weekend. The rest are set to update their meters gradually through Feb. 28.

“It’s hard to carry out the update operation on a large scale during the weekend, as it’s difficult to find parking spaces that can accommodate the large numbers of taxis,” Ji Woo-sun from the Seoul city government’s taxi management team, told The Korea Herald.

“Most of the operations are conducted at parking lots located at public parks, such as Seoul Grand Park or World Cup Park. On weekends, however, there are not many parking spaces available due to the visitors.”

Until the update is completed, taxis are required to hang a new fare table behind the front seat and add an extra charge to the fare on the meter. The table indicates the original fare on the meter, the additional cost and the final price.

A taxi driver on Sunday afternoon told The Korea Herald that the calculation process is confusing.

“I need to pull the car over to explain and calculate the new fare, which takes time. Some passengers just tag their credit card before I have added the extra charge, which makes the situation even more complicated. Yesterday, I let two customers go without paying the additional money,” the driver said.

“Colleagues who work the late night shift said some drunken passengers yelled at them or complained about the bothersome calculating process, saying ‘the service never improves even though I’m paying more money.’” 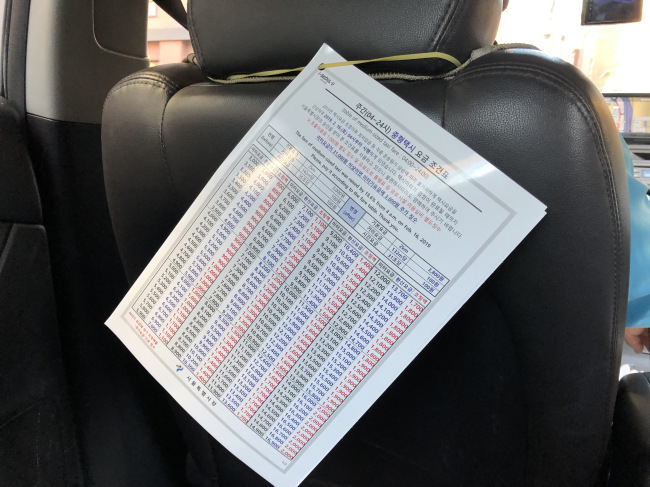 Another driver waiting for a passenger in Myeong-dong, a popular tourist shopping spot, said it is hard to explain why he is adding extra money to the original fare to foreign passengers.

“Many Korean customers know the new fare system as it has been on the news, but most foreign passengers have no idea why I’m collecting more money. I had two Chinese passengers today, and it took such a long time to explain it with body language,” the driver said.

A tourist from Canada, who took a taxi from Insa-dong to Myeong-dong, also said she was a little taken aback when the driver asked her to pay an extra charge.