China calls on US to reciprocate NK denuclearization steps

Wang issued the call in a speech to the United Nations General Assembly in New York, saying the political situation on the Korean Peninsula has seen a "major turnaround" this year. 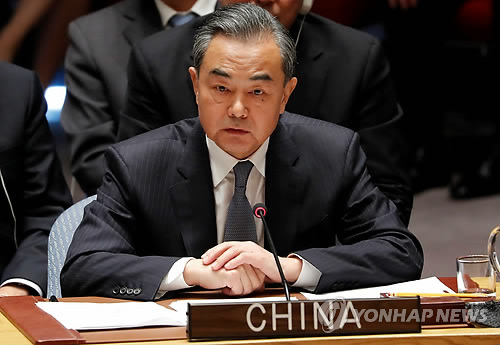 "China supports all-out improvement of relations between the North and the South of the Peninsula, as well as efforts to facilitate dialogues between the DPRK and the US," the minister said, referring to North Korea by its formal name, the Democratic People's Republic of Korea.

He added that Beijing encourages Pyongyang to continue down the path of denuclearization.

"At the same time," Wang said, "we believe it is also right for the US to make timely and positive responses so as to truly meet the DPRK halfway."

The US and North Korea have been in negotiations to implement a denuclearization agreement reached by US President Donald Trump and North Korean leader Kim Jong-un at their historic Singapore summit in June.

North Korea has taken steps to dismantle its nuclear and missile testing sites, but fallen short of US demands for a verification process and a full declaration of its nuclear arsenal.

At a meeting with South Korean President Moon Jae-in last week, Kim committed to permanently shut down a missile engine testing facility in front of international inspectors, and, conditional on corresponding measures from the US, the regime's key nuclear complex.

China, North Korea's sole major ally and trading partner, has been accused by the US of violating UN Security Council sanctions on the North.

Wang said Beijing will continue to enforce them.

"Meanwhile, China calls upon the Security Council to take timely actions in light of the development and changes of the situation to create more favorable conditions for a peaceful settlement of the Peninsula issue through political and diplomatic means," he said. "Effective settlement of the issue requires complete denuclearization, as well as establishment of a peace mechanism. Only when the two wheels move in tandem can the issue be truly resolved and can peace start to dawn." (Yonhap)