Ronaldo off the mark as Juventus maintain 100% record

But there was controversy in Turin as Juventus winger Douglas Costa was sent off late on after being caught on camera spitting at Sassuolo's Federico Di Francesco.

Five-time Ballon d'Or winner Ronaldo, who arrived amid great pomp and ceremony following a 100-million-euro ($117 million) deal from Real Madrid, tapped in from barely a yard out after a goalmouth scramble on 50 minutes.

The 33-year-old added a second 15 minutes later following a counter-attack orchestrated by Emre Can as the defending seven-time Italian champions moved three points clear of Napoli.

"I'm happy. I worked hard and I knew that the goals would come," said Ronaldo.

"I thank my teammates who really helped me and allowed me to adapt to Italian football."

"This is football. The important thing is that the team wins. I was a little tense with all the talk after my move from Real Madrid and not scoring, so there were a lot of expectations, but I thank my teammates for supporting me throughout."

Senegalese striker Khouma Babacar headed in a consolation goal for Sassuolo in injury-time as the side from Modena fell to their first defeat of the season. 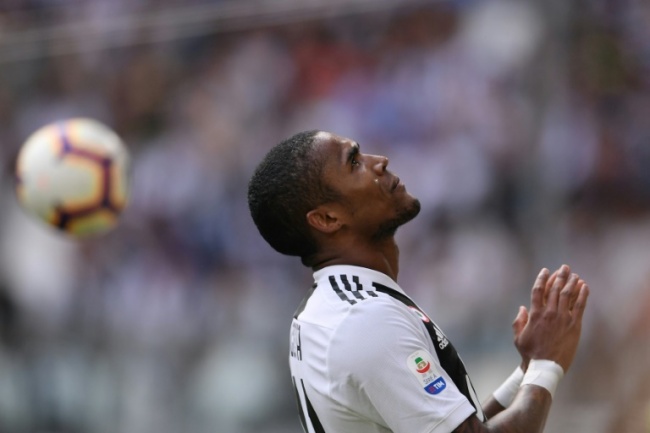 "Over the top reaction" - Brazilian Douglas Costa apologises for spitting at Federico Di Francesco. (AFP)
"I would like to apologise to all the Juventus fans for my wrong reaction during today's game," wrote Costa on Instagram.

"I also apologise to my teammates, who are always by my side, in good and bad times. It was ugly, I am aware of that and I apologise to everyone for that.

"I want to make clear that this isolated conduct has nothing to do with what I've shown throughout my career."

Juventus are the only unbeaten side after Napoli inflicted a first loss on Fiorentina on Saturday with a 1-0 win ahead of next week's Champions League trip to Red Star Belgrade.

Sassuolo are third with seven points.

Bolstered by five-time winner Ronaldo, Juventus begin their quest for a first Champions League title since 1996 at Valencia on Wednesday.

"The Champions League is my favourite tournament," said Ronaldo, who scored 15 goals in the tournament last season. "It's a very difficult group, we know that we can do well and Juve must focus on being the best."

Roma's confidence was dented ahead of their daunting midweek trip to Champions League holders Real Madrid, as bottom club Chievo came from two goals down to snatch a 2-2 draw at the Stadio Olimpico.

Stephan El Shaarawy and Bryan Cristante put Roma, who lost to AC Milan before the international break, firmly in command at half-time.

But Chievo, beaten 6-1 by Fiorentina last time out and on minus points after being deducted three points by the Italian football federation for false accounting, battled back in the second half.

Valter Birsa pulled a goal back in the 52nd minute, with Polish striker Mariusz Stepinski sealing a point for the club from Verona seven minutes from time.

"This was a game we had under control, we should have killed it off. This can't happen against Real," said Roma coach Eusebio Di Francesco.

The Roma coach added: "We'll be going out to challenge Real Madrid on Wednesday. We mustn't lose our heads, even if these results destabilise us."

Roma are ninth with five points from four games -- already seven points adrift of Juventus -- and also behind city rivals Lazio who won at Empoli with Marco Parolo scoring the only goal.

On-loan Juventus forward Gonzalo Higuain scored his first goal for AC Milan on 55 minutes to snatch a 1-1 draw at Cagliari, after Joao Pedro had opened the scoring for the hosts in just the fourth minute. (AFP)