[Album review] 20 years is just a number for Shinhwa 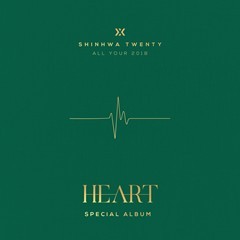 There’s a saying that over 10 years, even the rivers and mountains change. In the 20 years since Shinhwa’s debut in 1998, the country has seen five different presidents in office, generations have shifted and fans have embraced a new definition of K-pop.

So the 20-year anniversary album of Shinhwa, the longest-running K-pop act to date, is a nod to the band’s inexhaustible range of talent and passion.

Titled “Heart,” the six-track album kicks off with “In the Air,” an up-tempo house track peppered with soft and toned-down rapping by Yoon Mi-rae. While it is experimental in that the track marks the group’s first take on the genre and collaboration with Yoon, “In the Air” is sugar-coated with Shinhwa’s unique warm nostalgic vibe, creating a surprisingly comfortable atmosphere.

Similarly toned down and stripped of heavy synths, lead track “Kiss Me Like That” is groovier and more mature with its mix of guitar strings and the velvet vocals of the veteran singers. Penned by popular lyricist Kim Ea-na, the love song’s lyrics are outright seductive and intuitive, but it’s Shinhwa that makes the sound stylishly restrained. Funky pop number “Level” is a reincarnation of the group’s previous old school vibe, only richer in sound.

The compilation also includes lyrics written by Shinhwa vocalist Minwoo for “Here I Come,” a blend of Latin pop and future bass. The rest of the album cruises at that same placid altitude, with “L.U.V,” an emotional R&B number, and “Don’t Leave,” an acoustic and poignant break up song, rounding out the album.

As the group with the most longevity in the scene, Shinhwa deserves a round of applause for honing its musical edge and setting a good example for younger artists. It has won the hearts and ears of people across generations.