Shin scored 74 points to finish first among six final contestants at the Jakabaring Sport City Shooting Range in Palembang, Indonesia, the co-host city of the Asian Games with Jakarta. 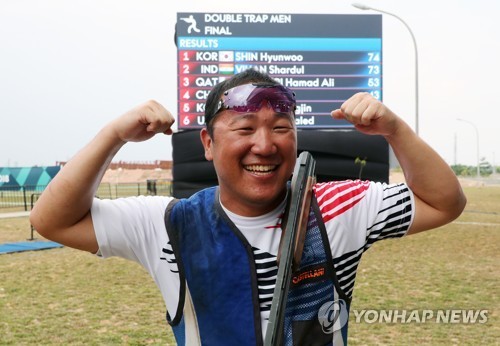 The 34-year-old trailed 73-72 against Shardul Vihan of India with two shots remaining. He cleared his last two shots, however, to collect a one point victory over Vihan.

This was South Korea's first shooting gold at Jakarta-Palembang 2018. Prior to Shin's gold, South Korean shooters had won three silvers and two bronzes.

Shin also became the first South Korean to win a gold in the double trap competition at the Asian Games. In double trap, participants use a shotgun to break a clay disk flung away from the shooter at high speed. They have to shoot down two targets released simultaneously from the house.