By Kim Kyung-ho
Published : Apr 4, 2018 - 16:00       Updated : Apr 4, 2018 - 17:22
Concerns over Korea’s mounting state liabilities and debt are being deepened by the Moon Jae-in administration’s push to hire a massive number of public sector workers and expand government spending beyond limits set by an existing fiscal management plan.

Korea saw its state liabilities for pensions paid to retired public employees and debt owed by central and regional governments more than double over the past six years to exceed 1,500 trillion won ($1.42 trillion) combined last year.

Specifically, public service pension liabilities and national debt amounted to 845.8 trillion won and 660.7 trillion won, respectively, according to data from the Ministry of Strategy and Finance.

Korea’s state liabilities and debt grew by a combined 122.7 trillion won from a year earlier in 2017, with the former accounting for 76 percent of the increase. 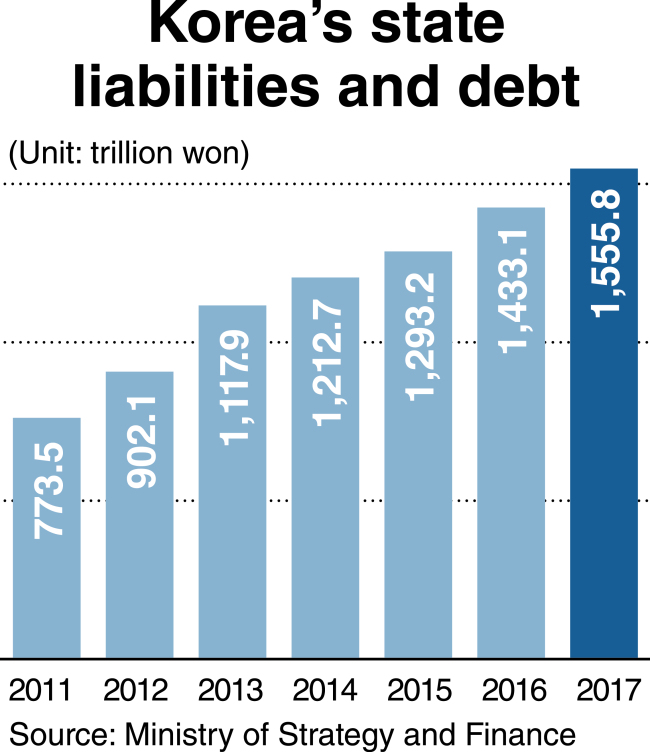 The steep rise in pension liabilities has amplified worry about President Moon’s plan to hire 174,000 public servants during his five-year term that ends in 2022.

Moon and his aides have justified the planned recruitment as necessary for easing the country’s deteriorating youth unemployment.

Nevertheless, its size looms too large, given the number of government employees rose by less than 60,000 over the period between 2009 and 2016 to about 1.03 million.

The National Assembly Budget Office last year estimated that recruiting public servants as planned by the Moon administration would cost more than 350 trillion won in wages and pensions for them.

Opposition lawmakers find it difficult to oppose the recruitment plan that has been promoted as being helpful for enhancing public safety and services.

“Increasing the number of government employees without revamping the pension system would put unbearable burdens on fiscal management over the long term,” said a researcher at a state-run think tank, asking not to be named.

The guidelines for drawing up the 2019 budget, which was approved by the Cabinet last week, called for the rate of growth in expenditure to exceed the 5.7 percent set by the fiscal management plan for 2017-2021.

Accordingly, budget spending for next year is expected to surpass the originally planned outlay of 453.3 trillion won.

The 2019 expenditure could exceed 460 trillion won if the increase rate is close to 7.1 percent for this year.

Such rates of increase in budget spending far exceed the country’s nominal economic growth rate, which is estimated to remain at 4.8 percent in 2018 and 2019.

The parliamentary budget office forecast debts owed by central and regional governments would balloon by more than 400 trillion won over the next five years to 1,097.5 trillion won in 2022, if various new fiscal programs were pushed through.

Korea’s fiscal health is set to worsen at an increasingly fast pace, as fixed spending, including welfare expenditures, has already accounted for more than 50 percent of the state budget, experts say.

The country’s welfare spending, which is set at 133 trillion won this year, has expanded 7 percent on average annually over the years since the 2008 global financial crisis, while the overall government outlay grew by an annual average of 4.4 percent.

A study by the Korea Economic Research Institute, a private think tank, last year projected that if welfare spending continues to grow at the current pace, the country would see its ratio of welfare expenditure to gross domestic product rise to the world’s highest level by 2040.


The Moon administration has been criticized for resorting to using taxpayer money to induce young job seekers to work at small firms and prevent employers from dismissing workers due to a sharp increase in the minimum wage.

It is drawing up a supplementary budget of 4 trillion won designed to help boost employment following the implementation of an extra budget of 11 trillion won for a similar purpose in the latter half of last year.

Kim Sang-heon, a professor of financial administration at Seoul National University, said the national debt might be at a manageable level for the time being, but its rapid increase should set off warnings.

He warned it would not be inconceivable that the government be on the brink of bankruptcy if expansionary fiscal policy is carried through in a populist manner over the coming decade.

A researcher at a state-run policy research institute, speaking on condition of anonymity, indicated that massive fiscal inputs, which could leave future generations with heavy debt, should undergo thorough scrutiny, and those who decided on them should be held responsible for their results.

The Moon administration seems to be more aggressive toward expanding fiscal spending partly on the back of revenue surpluses in recent years.

Critics say such discrepancy can lead to distorting fiscal responses to economic cycles and expanding budget expenditure as a result of mistaking temporary factors behind revenue increases for structural improvement in taxation sources.