By Cho Chung-un
Published : Mar 7, 2018 - 17:11       Updated : Mar 7, 2018 - 19:17
For Scott Park, a 42-year-old businessman in Seoul, seeing Samsung’s de facto chief paraded in handcuffs at the height of the presidential bribery scandal last year was not something that he thought he could expect just a few months earlier.

To him, Samsung has always been a prime representation of the South Korean economy, more so in recent decades, as the conglomerate has pulled far ahead of its rivals, led by Lee Jae-yong with a global reputation to claim for.

“It was because of how we grew up, believing that chaebol were the foundation of our thriving economy,” he said. “But things seem to be changing in the name of justice.”

While there have been more than a few incidences of chaebol leaders being arrested, indicted or imprisoned in the past -- five out of the top 10 chaebol groups have had their leaders serve prison terms -- Lee’s detainment felt different to many Koreans.

Perhaps it was because it came after the unprecedented scene of nine chiefs of the country’s largest conglomerates sitting side by side at the National Assembly in December of 2016, stifled by a barrage of criticisms from lawmakers.

Or perhaps it was because the crime for which Lee was sentenced to -- bribing the politician -- was now being judged with more than a slap on the wrist but as a grave violation even for those that had been considered immortal beyond the realm of law.

As Koreans witnessed changes in social climate toward chaebol, Lotte Group Chairman Shin Dong-bin became the latest mogul to be put behind bars last month by being sentenced to 2 1/2 years in prison over his involvement in the high-profile scandal that impeached former President Park Geun-hye.

These chaebol scions’ sentences made headlines all over the world. A Wall Street Journal column published late last year even labeled it the end of the chaebol era.

In a tearful testimony in December last year, Samsung’s Lee said he won’t pursue the post of group chairman, and keep his scope of business within the tech giant, in his plea for a lighter appeal sentence.

On the surface, indeed, the change in the corporate circle appears imminent, together by the liberal Moon Jae-in government’s chaebol reform drive.

But that’s not enough to entirely change “the nature of Korean chaebol,” said Korean experts on corporate governance.

Despite persistent anti-public sentiment toward how their pursue their private interests and their expedient methods of transferring their wealth, the way of keeping the family control is likely to continue. And it is difficult to expect an immediate change in the way they operate, observers say.

But why, despite their bitter lessons in prison?

It goes without saying, the tendency of keeping the business within the control of family and bequeathing the assets to next-generations is a global thing. Around 70 percent of listed companies in Europe are controlled by families. But cases of South Korean chaebol seems to be on another level.

“They have this obsession for succession, far severe than those in other countries,” said Bruce Lee, founder of Zebra Investment Management, a Seoul based hedge-fund.

“I believe it’s because of the country’s deeply-rooted Confucian culture as well as (heavy) inheritance tax system,” he said.

In Confucianism, the eldest son inherits the family assets and becomes responsible for the family, succeeding his father’s role. Founders’ have carried this tradition over into their managerial succession, as a way of keeping the ownership in the family, backed by hierarchical relations between employer and employee, writes Tan Soo Kee, a scholar at the University of Michigan in his paper titled “Influences of Confucianism on Korean Corporate Culture.”

For last 60 years, South Korean chaebol thrived, entering markets around the world and allowing in foreign investments from the West.

The inflow of foreign capital and the government’s adoption of market principles, however, brought chaebol under closer scrutiny.

Despite the changing landscape, they have somehow succeeded in keeping their businesses under their control from generation to generation, even though their stakeholdings in their companies are relatively miniscule.

According to CEOScore, eight out of the nation’s top 10 conglomerates have passed the leadership baton down for three generations. The top 10 groups own nearly 30 percent of all business assets in Korea, according to Fair Trade Commission.

Five chairmen of the top 10 companies were second-generation chaebol scion, while Lotte Group is the only conglomerate under control of its founder Shin Kyuk-ho’s ownership. The 95-year-old chairman holds the largest portion in Kojyunsya, which controls Japanese operations of Lotte and ultimately the retailer’s operations in Korea.

LG and GS, led by third-generation chaebol members, appear to be preparing to pass on the leadership to a fourth generation, according to industry watchers.

Most Korean chaebol heads hold insignificant portions of their companies’ total shares, but control their empires through a complex cross-shareholding structure. And this makes Korean chaebol unique.

Samsung’s Lee family runs the tech-to-finance empire with a little more than 1 percent of total shareholdings, while the family that runs Hyundai Motor owns 3.35 percent of shares, according to the FTC. The average percentage of shares held by chaebol families hovers around 3.5 percent in Korea. 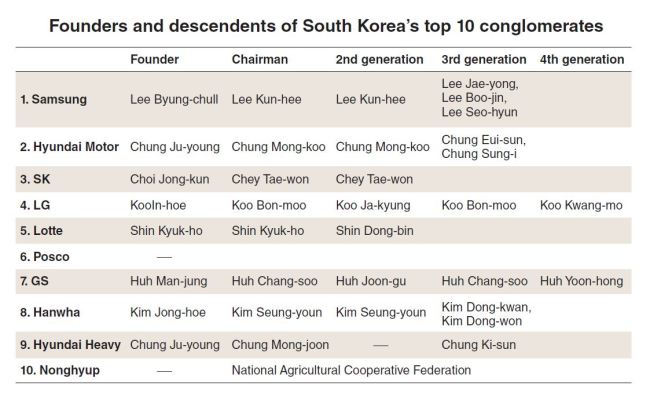 The notion of chaebol being major contributors to Korea’s economic miracle has paradoxically embedded the concept that regardless of the percentage of shares, Chaebol families are the owners of the companies.

It has left many Koreans agonizing over a double standard: tolerating the conglomerate chief’s invincibility, yet loathing their unethical accumulation of wealth.

“If US billionaire Warren Buffett acquires all of Hyundai Chairman Chung Mong-koo’s 3 percent share in the carmaker, would he become the most powerful leader in the company?” asks Park Ju-gun, president of CEOScore.

“According to the market principles in the West, Buffett can, but it would never happen here because we still think that those who have the control over the companies, the so-called chairmen, are the owners, not shareholders.”

The disproportionate power they exercise has long been a concern for foreign investors.

“Foreign investors are concerned about conglomerates owning IT and steel and also retail businesses at the same time and they are all under the control of one family member who has very little expertise in each segment,” said Lee of Zebra Investment. Can these non-experts could improve return-on-equity? They don’t think so.”

Pointing out the controversial merger between two Samsung affiliates in 2015 and Hyundai Motor’s acquisition of 10 trillion won land in Samseong-dong, Kim Woo-jin, associate professor of finance at Seoul National University, said that the decisions made by the owner families in pursuit of their interests put shareholders at risk.

“The problem is not the succession itself, but the decisions made in pursuit of their own interests … The major problem of Samsung merger case, for instance, is not in (its purpose of) speeding up (Lee’s) succession, but that the company has inflicted tremendous damage to Samsung C&T shareholders in the course of that decision, and that the damage diverted profits to the owner family.”

“The similarity between the two, Joseon dynasty royals and chaebol families today, is that they hold absolute power and have no one to hold them accountable,” Park of CEOScore said.

“The law on commercial business and corporate governance should be revised so that the government could launch a stronger monitoring system on chaebol and harsher punishment so that families cannot spend even a single penny for their own interests.”

The Korean market is also still at an infant stage and it is premature to make a comparison with the west.

“Markets in the west went through a series of historic events such as the Great Depressions and World Wars for the last 200 years,” Lee of Zebra said adding that the period over which Korea had embraced the principle of shareholder rights was closer to a decade.

“Foreign investors are demanding a higher standard of transparency in governance and the National Pension Fund is gearing up to adopt stewardship code. If the market works together with these effort, chaebols will change eventually ... but it will take very long time.”

The high-profile trials of Samsung and Lotte, may have changed public perception toward chaebol, but experts worry that that things will go back the way they were, citing previous trials involving other tycoons.

“Did chairmen from CJ, Hanwha and SK change their governance or have their conviction at courts have tarnished the companies’ corporate reputation afterward?” a senior researcher at Korea Corporate Governance Service, who declined to be named.

“Though the nation became less tolerant toward chaebol wrongdoing, conglomerates are still the dream workplace for many young people, reflecting that the power of capital remains dominant.”