Observers said that the move comes as companies want to capitalize on recent gains and better insulate themselves from uncertainties going forward.

S-Oil Corp., which is controlled by Saudi Arabia's Aramco, has set its eyes on completing its residue upgrading complex and olefin downstream complex in the first half of 2018. The company is investing 5 trillion won ($4.6 billion) into the development projects. 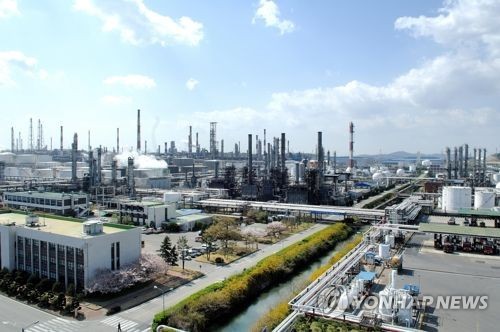 S-Oil said that the investment, the largest single injection of funds in an oil refinery project in the country comes as it aims to maintain its competitiveness in the market and overcome any managerial challenges that may arise.

"Once complete, S-Oil will have one of the most efficient refinery operations in the world that can reduce costs and boost its standing among rivals," a corporate source said.

GS Caltex Corp. another major refiner here that has poured some 11.3 trillion won into facility upgrades from 2000 through 2016, said it is considering making more investments. The company started work on a biobutanol plant that will go into operation next year.

The refiner said it plans to make more investments into non-oil refining operations down the line.

Others such as Hyundai Oilbank Co. that partnered with Lotte Chemical Corp. to inject 1.2 trillion won last year to build a new mixed xylene production process said its operating profits up till the third quarter stood at close to 200 billion won.

Hyundai Oilbank also said that it plans to inject 570 billion won this year to upgrade its existing facilities.

Sources said the company is moving into electric car batteries and even information electronics areas.

Its top executives said earlier this year that SK Innovation must seek new growth engines going forward by making timely investments in chemicals and other area.

SK Innovation has bought foreign companies such as the chemical unit of Dow Chemical and acquired the U.S. company's global ethylene acrylic acid business for $370 million.

In the battery field, the company is building various plants that can allow it to tap into the fast growing market.

SK Innovation said that while it is diversifying, it is committed to raising its competitiveness in its core business. It already announced a 1 trillion won plan to upgrade its plant in Ulsan 414 kilometers southeast of Seoul. The plant will get a vacuum residue desulfurization facility. (Yonhap)