President Moon used his seven-day trip to Indonesia, Vietnam and the Philippines earlier this month to trumpet what has been dubbed the New South Policy.

He told regional business leaders that South Korea would seek to double its annual trade with the 10-member Association of Southeast Asian Nations to over $200 billion by 2020 and raise relations with the region to the level of its ties with the four major powers surrounding the Korean Peninsula -- the US, China, Japan and Russia. 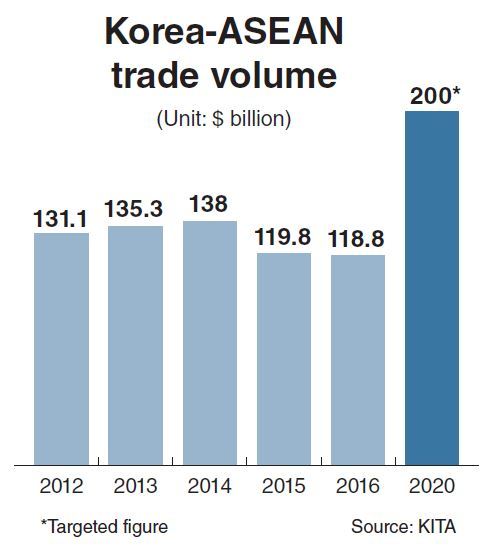 Moon proposed building a people-centered community that will ensure co-prosperity and peace.

They note the government and business circles should cooperate more closely to put together a package of measures to make Korea a better partner for ASEAN member states.

“It is needed to take an approach fit for specific conditions and needs of each country,” said Lee Yong-hwa, a researcher at the Hyundai Research Institute, a private think tank.

Korea feels the need to enhance trade and economic ties with Southeast Asian countries all the more because risks from its two largest trading partners --China and the US -- are growing.

It suffered heavy economic losses from China’s retaliation against its decision last year to accept the deployment of an advanced US anti-missile system known as the Terminal High Altitude Area Defense.

Beijing has recently shown signs of moving to ease reprisals since it agreed with Seoul last month to end the THAAD dispute.

But Korean businesses still remain cautious that China might return to its bullying tactic at any time.

Korea is also under mounting pressure from the US to reduce its trade surplus with the world’s biggest economy. It has been pushed by the Donald Trump administration into agreeing to renegotiate a bilateral free trade agreement that went into effect five years ago.

Korea’s trade volume with ASEAN members stood at $118.8 billion last year, compared to $211.4 billion with China and $109.7 billion with the US, according to data from the Korea International Trade Association.


The ASEAN Economic Community launched in December 2015 has the potential to emerge as a market equivalent to China in the future.

The combined gross domestic product of its members, which amounted to $2.54 trillion last year, is projected to grow 5.5 percent for the period between 2010 and 2019, far above the global average of 3.7 percent.

The population in the region is forecast to increase from 639 million in 2015 to 800 million in 2060. With the region’s median age at just 28, the proportion of working-age people is estimated to hover around 67 percent in 2035.

Korean firms have been shifting their strategies from using the region as a production base with lower labor costs to advancing into growing local consumption markets.

They are also poised to find more opportunities to participate in an increasing number of infrastructure projects in the region.

But Korea is facing intensifying competition with Japan and China, which have expanded their presence in Southeast Asia.

Since the mid-2000s, Japan has strengthened efforts to expand trade and investment ties with ASEAN members under the “China Plus One” strategy aimed at reducing its reliance on the Chinese market.

This endeavor enabled its businesses to overcome the state-backed boycott by shoppers of Japanese products in China in 2012 amid an escalating territorial dispute between the two powers.

China has also expanded economic ties with Southeast Asia, with its clout over the region expected to further strengthen in the course of pushing for its “One Belt One Road” initiative designed to build a trading and infrastructure network across Eurasia.

Korea plans to double its development aid for ASEAN members to $14 million by 2019 and upgrade a bilateral free trade accord with the bloc to help shore up cooperation between the two sides.

Given Korea is relatively limited in offering financial assistance compared to China and Japan, it needs to pursue a strategy of complete partnership with Southeast Asian nations, experts say.

In his speech to ASEAN business leaders in Manila last week, Moon said Korea’s experience in its own course of development “makes it the best partner for ASEAN countries that are striving for development.”

He cited the transportation, energy, water management and information technology industries as the four sectors with the greatest potential for cooperation between the two sides.

Min Hyeok-ki, a researcher at the Korea Institute for Industrial Economics and Trade, noted Korea is particularly well positioned to settle ASEAN countries’ troubles with IT infrastructure shortages.

To provide this and other long-term support that would eventually help boost Korean businesses in the region, the government and financial institutions need to go hand in hand with private companies, experts say.