Samsung chairman’s assets could be subject to tax: FSC chief 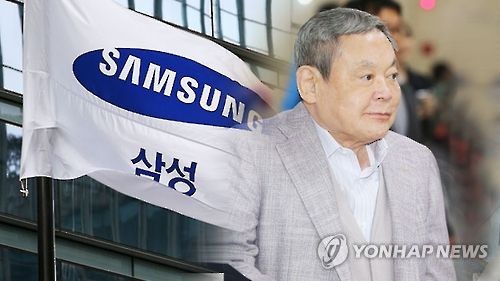 At a parliamentary audit session Choi Jong-ku, chairman of the Financial Services Commission, told lawmakers that the regulator will review traces of 4.4 trillion won ($3.9 billion) in assets that had been kept under accounts registered with borrowed names. The authorities, in cooperation with the Financial Supervisory Service, could levy taxes on capital gains earned by Lee from the assets, he said.

Choi also agreed with Rep. Park Sang-jin of the ruling Democratic Party of Korea on imposing withholding tax. The FSC chief said that financial authorities will look into what had happened after Lee withdrew money from the borrowed-name accounts.

Authorities can levy 99 percent of interest and dividend income gained from assets that are kept under borrowed names, as a means of punishment for violations of the law.

The comment came after the lawmaker raised speculation earlier this month that financial authorities had turned a blind eye to Lee‘s assets, though the tycoon had at that time vowed to pay taxes and return part of the funds to society while apologizing for causing the public concern. Lee was convicted on charges of tax evasion and breach of trust.

The lawmaker said taxes could be worth tens of millions of dollars if Lee had followed the rules at that time.

In 2008, special prosecutors discovered that Lee had assets said to have been inherited from the founder of Samsung Group, his father Lee Byung-chull. The assets were held in about 1,200 accounts under borrowed names. The law stipulates the use of real names when opening a bank or other financial accounts.

Lee has been hospitalized since suffering a severe heart attack three years ago.