By Kim Hoo-ran
Published : Oct 2, 2017 - 16:32       Updated : Oct 2, 2017 - 16:32
Many galleries and museums in Seoul stay open during the long Chuseok holiday, which is a great opportunity to explore the arts scene in the capital. At Deoksugung Palace, artists show us their interpretation of the short-lived Daehan Empire (1897-1910) in an exhibition organized by the National Museum of Modern and Contemporary Art (MMCA) and the Deoksugung Palace Management of the Cultural Heritage Administration.

“Deoksugung Outdoor Project: Light, Sound, Landscape” links the past and the present, exploring the historic significance of the palace as the site of the proclamation of the Korean Empire on Oct. 12, 1897 and its relevance today. 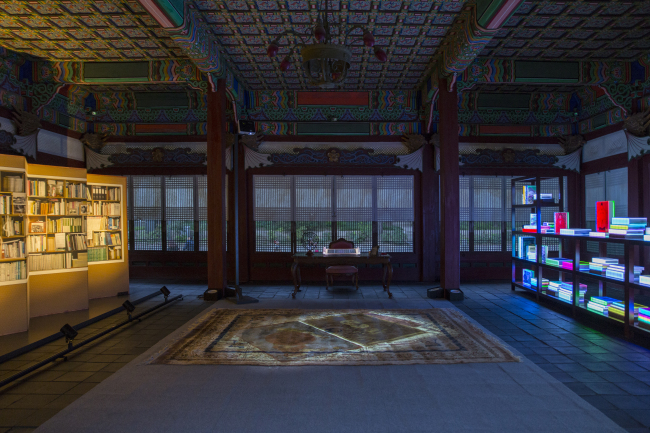 "Lumiinous Days of Korean Empire" (2017) by Airan Kang (right) and “Chaekgado389” (2017) by Lim Sook-sik are on display at Deokheungjeon Hall, used by Emperor Kojong as a reception chamber, at Deoksugung Palace in Seoul. (MMcA)
The nine participating artists turn the palace space into one large gallery, taking inspiration from the seven locations of their site-specific installations. Entering the small room created at a corridor opposite Junghwajeon, the first building at the entrance of the palace, visitors are transported in time and space. “A Peony,” a slide show by artist and furniture designer Jang Min-seung, who was also once a member of a famous band, featuring music of Yang Bang-ean, music director of the PyeongChang Olympics opening and closing ceremonies, shows buildings and slices of life from Korea’s modern period that only survive in historical records.

Works by Kang Ai-ran and Lim Soo-sik turn Deokheungjeong Hall, used by Emperor Gojong as a reception chamber, into a library. Kang’s lightbox installation, “Luminous Days of the Korean Empire,” includes recreations of books that Emperor Gojong enjoyed as well as diplomatic documents and materials on court culture. Opposite Kang’s work is “Chaekgado389” by Lim who imagines what a study of scholars who specialize in Korean Empire might look like in the style of cheokgado, a traditional still-life of books and related items in a study.

The corridor opposite Hamnyeongjeon Hall is open to the public for the first time, where 21st century technology meets history. Here, visitors will be able to watch Oh Jae-woo’s virtual reality installation, “A Dream within a Dream” lying on the floor. (Deoksugung Palace, until Nov. 26. Open on Oct. 4)

"Chicks and Grasshoper" by Qi Baishi (SAC)
The first-ever exhibition of works by Qi Baishi (1864-1957), one of the most well-known contemporary Chinese painters, is being held at Seoul Calligraphy Art Museum, Seoul Arts Center, until Oct.8. It is a rare opportunity to see works by the prolific and versatile artist who was adept at poetry, calligraphy, painting and seal-carving.

More than 50 pieces by Qi, including paintings and seals, are on display along with his relics and 40 works by Chinese and Korean artists that pay homage to the master painter. Born to a peasant family, Qi, who became a carpenter at 14, was largely self-taught as a young artist. However, he trained under several mentors throughout his life, becoming a serious painter in his 50s.

When many traditional art works and culture were destroyed during World War II, Qi was still very much respected. The fact that he was elected to the National People’s Congress and appointed honorary chairman of the National Artists’ Association speaks to the place Qi occupied in Chinese art world at the time.

Today Qi is well known for his whimsical and finely detailed paintings of small subjects such as birds, insects, vegetables and shrimp. A prolific artist, he said that it was only after he turned 80 that he produced proper paintings. (Seoul Calligraphy Art Museum, Seoul Arts Center, until Oct.8. Open on Oct. 4)

Belonging to China’s Generation Y, or Balinghou as they are known in China, Beijing-based Sun Xun is considered one of most talented young artists in China today, blurring the boundaries between drawing, painting, animation and installation.

Arario Gallery Seoul is holding the artist’s first solo exhibition in Korea, “Tears of Chiwon” which includes “Interesting Hunters All Perform Magic,” a large-size painting he completed while staying in Seoul for a week. Inspired by the shared experiences of Korea and China in the modern and contemporary period and cultural similarities of the two countries, Sun focused on themes of “tradition” and “mystery.”

"Suan Ni" by Sun Xun (Arario Gallery Seoul)
Sun was born 1980 in Fuxin, a mining town in Liaoning Province. Having grown up in the period immediately following the Cultural Revolution, his works are influenced largely by the legacy of the turbulent and bloody period in Chinese modern history.

Combining traditional ink paintings with woodcut, Sun gives modern language to his works that explore the gap between the history he learned at school and the stories he heard from parents, and the ideal economic system taught at schools and the capitalist system he has experienced firsthand. (Arario Gallery Seoul, until Nov. 5. Closed on Oct. 4)