The high performance of two local chipmakers -- Samsung Electronics and SK hynix -- has helped boost the country’s exports and corporate profits as a whole. But the overreliance on them causes concerns over the potential damage the Korean economy will suffer when the boom cycle in global demand for semiconductors ends.

The country’s semiconductor exports are expected to exceed $90 billion this year, a sharp increase from $62.2 billion in 2016, due to growing demand and higher prices, according to a recent report from the Korea International Trade Association. 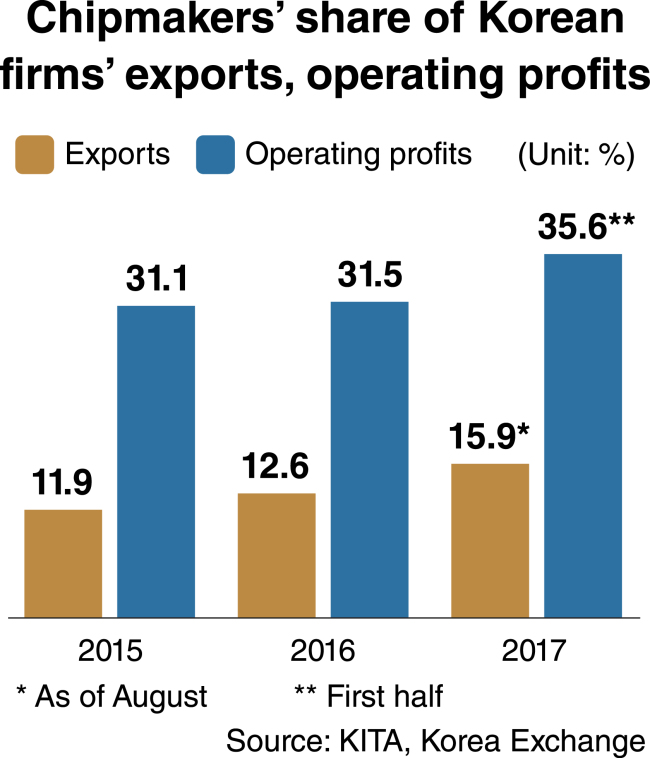 In the first eight months of the year, outbound shipments of chips surged 52 percent on-year to $59.5 billion, accounting for nearly 16 percent of Korea’s total exports in terms of value in the same period.

Semiconductors’ proportion of the country’s exports rose from 11.9 percent in 2015 to 12.6 percent last year.

Samsung Electronics and SK hynix accounted for 35.6 percent of operating profits earned by all listed local manufacturing firms in the six months through June, according to data from the Korea Exchange. The figure stood at 31.1 percent in 2015 and 31.5 percent in 2016.

Analysts estimate the combined turnover and operating profits of the two chipmakers will reach record highs of 100 trillion won ($87.8 billion) and 45 trillion won, respectively, this year.

Data from the Korea Exchange showed the two chipmakers’ combined share of the total market capitalization of all listed local companies stood at 26 percent as of last Friday, up from 17 percent at the end of 2015.

Demand for memory chips is expected to remain high throughout next year, further heightening prospects for them.

Samsung Electronics and SK hynix accounted for 45.1 percent and 26.8 percent of the global dynamic random-access memory market, respectively, in the second quarter of the year, according to data from IHS Markit, a global financial services company.

In the NAND flash memory segment, Samsung Electronics and SK hynix took up 37.3 percent and 10.6 percent, respectively, in the cited period.

According to IC Insights, an industry tracker, global sales of DRAM chips and NAND flash memory are projected to grow 55 percent and 35 percent, respectively, on-year in 2017.

Park Hee-jung, an analyst at Kiwoom Securities, said the Korean economy’s reliance on the semiconductor sector would only deepen as most other manufacturing firms struggle with sluggish domestic demand and worsening external conditions.

Industrial facilities across the country ran at 71.6 percent of capacity on average in the second quarter of the year, according to Statistics Korea. The figure is the lowest since the January-March period of 2009 when the country was going through the aftermath of a global financial crisis.

Barring the semiconductors sector, the average operational rate is much lower, analysts say.

A report from the Korea Institute for Industrial Economics and Trade, a state-funded think tank, predicted the global market shares of the country’s key export items, including ships, cars and steel, would continue to shrink in the years to come.

Korean chipmakers have so far managed to leave their foreign rivals behind in terms of price and technological competitiveness by making pre-emptive investments in facilities and research and development. This has helped drive up global demand for their chips.

But economists predict the boom cycle in global demand for semiconductors may be over in a couple of years, exposing the vulnerability of the Korean economy.

“The current super boom cycle may not continue into 2019 when new fabrications being built will be ready for mass production,” said Oh Jung-suk, a professor of business administration at Seoul National University.

Chinese chipmakers are expected to rapidly catch up to their Korean rivals by making massive investments and scouting experts from abroad.

Many worry that the cooling down of the semiconductor boom could jolt the Korean economy, recalling the chipmakers’ slump after years of high performance led to an economic crisis in the late 1990s.

Oh said it is worrisome that Korea has no other industry to take the baton from the semiconductor sector.

When the economy relies on a certain industry excessively, the government needs to implement more cautious and balanced policies and ensure problems in other areas are not underestimated or overlooked, economists say.

Measures pushed by President Moon Jae-in’s administration since he took office in May have come under growing criticism for increasing corporate costs and paying little heed to boosting corporate competitiveness and nurturing new industries.

Apparently aware of this critical view, Moon urged Cabinet members Tuesday to step up efforts to promote what he described as innovative growth, in tandem with income-led growth.

Economists say he should back his refocused approach by accelerating regulatory and labor reforms, on which he has remained muted.