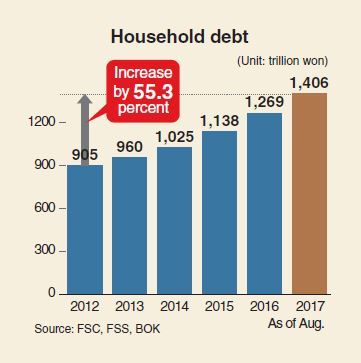 The amount of household debt in South Korea has surged by 55.3 percent in five years, according to data given by relevant authorities including the Financial Services Commission, the Financial Supervisory Service and the Bank of Korea.

The data released by the office of the Liberty Korea Party’s Rep. Shim Jae-cheol showed that household debt has exceeded 1.4 trillion won as of August this year. The average debt held by each household came at 46.9 million won last year, up from 36.8 million won in 2012.