Data released by Statistics Korea last week showed the on-year increase in the number of newly employed people in August fell to the lowest in four and a half years.

The unemployment rate for young people aged 15-29 stood at 9.4 percent last month, the highest for August since 1999, when the Korean economy was struggling with the aftermath of a foreign exchange crisis.

Such figures are embarrassing for the new administration, which has vowed to prioritize creating more jobs.

The statistics office cited an unusual reason -- rainy weather -- for the lackluster employment. 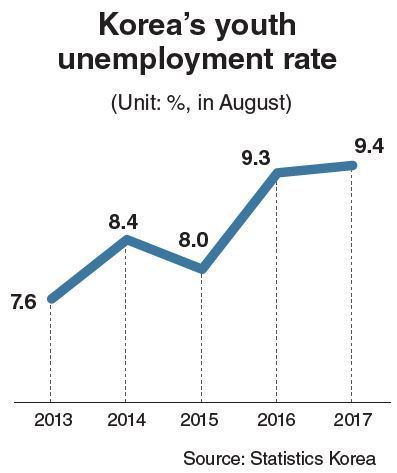 “As it rained almost every day in August, many daily workers were not hired at construction sites,” said an official at Statistics Korea.

Some 1.9 million workers were hired by local builders last month, up 34,000 from a year earlier, compared with an increase of 101,000 in the previous month.

The bad weather, however, had nothing to do with a sharp drop in the number of new jobs offered by accommodating facilities and restaurants, which employed 2.3 million people in August, a decrease of 40,000 from the year before.

A growing number of working-age Koreans have given up looking for jobs amid deteriorating labor market conditions. The figure rose by 62,000 on-year in August, up from 40,000 in July.

The latest employment data has added to strengthening criticism from business circles and economists that the Moon administration’s policy will result in reducing, not bolstering, employment.

In July, a commission comprised of representatives from labor and business circles as well as the government decided to raise the minimum wage by 16.4 percent to 7,530 won ($6.68) per hour next year, marking the steepest rise in nearly two decades.

The decision was apparently affected by Moon’s campaign pledge to raise the hourly minimum wage to 10,000 won by 2020.

Public corporations and private companies have been under pressure to give regular status to their temporary employees.

Experts worry that such measures will exacerbate the country’s unemployment problem down the road.

The planned cut in infrastructure spending, coupled with steps taken last month to curb rising house prices, is expected to dampen the construction industry, which has recently shown signs of declining.

Under the government-draft budget bill, public infrastructure investment is set to decrease by 4.4 trillion won on-year in 2018.

Industrial experts estimate a 1 billion won increase in demand will lead to hiring an additional 13.8 workers in the construction industry, compared with 8.6 in the manufacturing sector.

The steep rise in the minimum wage is expected to have a far-reaching negative impact on employment, with many small businesses saying they would simply be unable to keep up with it.

The fall in the number of employees at accommodating facilities and restaurants last month seemed to reflect employers’ bids to reduce their payrolls before the application of higher minimum wages.

In a departure from its passive attitude, the Korea Employers Federation last week hosted a debate, in which participants criticized the government’s handling of the minimum wage issue.

The organization has been blamed by its members for playing no role as the representative of business circles in the minimum wage negotiations earlier this year.

Yoon Chang-hyun, a professor of finance at the University of Seoul, said the Moon administration’s policy risks further polarizing the labor market by narrowing the door to new job-seekers while bringing higher wages and more secure status to existing employees.

Some Cabinet members, including Finance Minister Kim Dong-yeon, seem to begin noticing the negative effect of measures pushed by the new government.

Kim told a parliamentary session last week the government “will carefully review the pace of increase (in minimum wages) after next year.”

He also reiterated the administration has not considered collecting more taxes from large firms and said it would be impossible to grant regular status to all nonregular employees in the public sector.

In a forum held last week, two professors at Seoul National University made a harsh criticism of the income-led growth policy as far from a solution to the longstanding economic sluggishness.

Professor Kim Se-jik said the implementation of the policy focused on boosting short-term growth would only result in Korea’s potential growth rate falling below 2 percent during Moon’s five-year tenure.

Another professor Kim Young-sik noted the income-led growth policy put emphasis only on the demand side, ignoring the supply side, which he said was equally or more important in spurring growth over the long term.