North Korea fired yet another missile over Japan into the northern Pacific Ocean, South Korean and Japanese officials confirmed Friday, in a clear show of defiance against international sanctions and pressure.

The launch, which came days after the United Nations adopted its toughest-ever sanctions against the North, put millions in Japan into a “duck and cover,” escalating a sense of crisis in the region over the wayward regime’s relentless pursuit of missile and nuclear capabilities.

According to South Korea’s Joint Chiefs of Staff, the missile was launched at around 6:57 a.m. Friday from the vicinity of Sunan in the capital Pyongyang.

It traveled an estimated 3,700 kilometers, the longest for a North Korean missile ever tested. It reached a maximum height of 770 kilometers.

Given the trajectory and apogee, the projectile appears to have been fired at a normal angle, Seoul officials said.

This means that the Pacific island of Guam, host to important US military assets, is well within its range. The distance from Pyongyang to Guam is about 3,350 kilometers.

Officials and experts here presumed the projectile to be the intermediate-range ballistic missile Hwasong-12, with which Pyongyang last month threatened to attack Guam. Pyongyang fired a Hwasong-12 on Aug. 27, which also flew over Japan. The earlier launch had a flight distance of 2,700 kilometers and a maximum altitude of 550 kilometers.

The US said it appears to be an IRBM, while Japan did not rule out of an intercontinental ballistic missile. The North in July test-fired two missiles that it claimed to be its first ICBMs. On Sept. 3, the Kim Jong-un regime conducted its sixth and largest nuclear weapons test.

Hours after the launch, Pyongyang warned of even stronger actions against the United States.

“If the US continues to walk on the current course, we will take stronger actions for our self-defense,” the Rodong Sinmun mouthpiece of the ruling party said in a commentary. 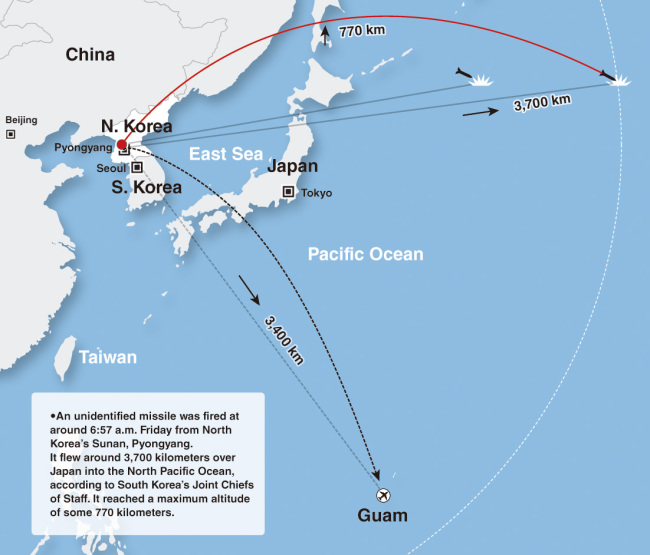 “The US should face up to a grim reality and make a decision to give up its hostile policy toward Pyongyang. It should make a wise decision to detach itself from issues on the Korean Peninsula,” it added.

South Korea responded to the provocation with its own launches, but one of the missiles nose-dived in the sea shortly after liftoff.

President Moon Jae-in, presiding over a National Security Council meeting at around 8 a.m., issued a strong message of condemnation. He said if the North continues to act this way, dialogue is impossible.

The UN Security Council scheduled an emergency closed-door meeting to be held Friday afternoon in New York. US President Donald Trump has not commented yet.

China vowed to “fully” and “strictly” carry out UN Security Council-approved sanctions, denouncing the North‘s missile provocation as a violation of UN resolutions.

Japanese Prime Minister Shinzo Abe strongly denounced the missile launch, which came a day after the communist regime threatened to “sink” it with nuclear weapons.

“North Korea should understand that there will be no bright future if it continues to follow the path like this,” Abe told reporters shortly after returning from his trip to India.

In Seoul, President Moon warned that with defiance and provocations, the North will earn only complete isolation. He also ordered the beefing up of Seoul’s military preparedness, particularly to counter potential new types of threats from the North such as electromagnetic pulse and biological weapons.

“Flouting the international community’s condemnations and warnings and the UN Security Council resolution, North Korea again fired a ballistic missile,” Moon said. “I sternly condemn and express anger at this series of provocations by the North.”

The Seoul government, however, said its plan, unveiled a day earlier, for an $8 million aid package for infants and pregnant women in the North, will not be affected by the latest provocation.

The three nations’ top nuclear envoys -- South Korea’s Kim Hong-kyun, Joseph Yun of the US and Kenji Kanasugi of Japan -- also spoke on the phone, vowing a strong response.