The live-fire drill came after North Korea on Sept. 3 conducted its sixth and largest nuclear test. The North on Wednesday vowed to continue its nuclear weapons program “until the fight to the finish is over,” despite new, tougher United Nations sanctions imposed on it this week.

“Through the exercise, (South Korea) showcased its capability to conduct a strong response to the enemy’s provocations and demonstrated the ability to carry out a precision strike at a long distance,” the Air Force said in a statement. 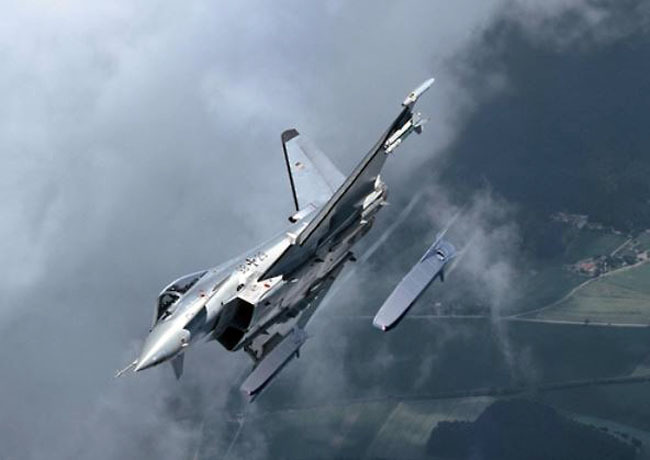 Taurus air-to-ground missile being launched from a fighter jet. (Yonhap)

Deployed here in 2016 for the first time, the Taurus missiles will boost South Korea’s capability to conduct its own pre-emptive strikes and military operations in taking out North Korea’s underground missile and nuclear facilities, analysts said.

Boasting a maximum range of 500 kilometers, the Taurus is equipped with stealth technology and GPS, allowing the missile to strike a long-distance target precisely without being disturbed by North Korea’s radar system and jamming attacks.

With the ability to carry a 480-kilogram warhead thought to be able to penetrate reinforced concrete, the missile is expected to play a vital role in conducting the “decapitation plan” against North Korea’s leader Kim Jong-un by destroying his underground wartime command.

“Through the live-fire exercise, we managed to confirm Taurus’ operational capability,” said Air Force Maj. Lee Hyeon-woo, who piloted the F-15k that launched the missile. “We are ready to retaliate against the enemy’s provocations with precision strike capability.”

Due to safety concerns, the missile fired Tuesday was adjusted to fly only 400 kilometers and carry an inert ordnance without explosives. The military had planned to conduct the drill in April, but delayed it to avoid the migration season for birds.

South Korea is seeking to adopt a total of 260 Taurus missiles by 2018 and mount them onto fighter jets such as the F-15K. Currently, about 80 units are thought to be fielded after the military received 40 in 2016 from Taurus Systems, a German-Swedish arms developer.

The Air Force had initially planned to acquire 170 Taurus missiles, but decided to increase the amount last October after North Korea conducted its fifth nuclear test. The missile costs about 2 billion won ($ 1.8 million) each.

“Considering the current security situation, we will do our utmost to adopt the (additional) Taurus as soon as possible and help the Air Force boost its capability,” said Lee Sang-moon, who oversees Taurus acquisition at the Defense Acquisition Program Administration.