Beijing seems unlikely to ease its stance on the issue in the wake of North Korea’s sixth and most powerful nuclear test Sunday.

The installment of the first batch of THAAD launchers and a radar earlier this year has led Beijing to step up its reprisal, coupled with spreading consumer sentiment against South Korean products.

Hyundai Motor, Korea’s biggest automaker, saw its China sales in the first seven months of this year decrease by more than 40 percent from a year earlier to 351,292.


Its four plants in China were compelled to stop operations for a week last month as a local supplier suspended parts delivery due to delayed payment.

Since March, retail giant Lotte has been ordered by Chinese authorities to shutter 74 of its 112 outlets in China for safety violations and it has voluntarily closed 13 others because of poor sales performance.

It has suffered a loss of about 500 billion won ($442 million) in China over the past six months, with its sales there in the second quarter remaining at a mere 21 billion won, just 7 percent of the turnover during the same period last year.

Duty-free shops here are struggling with plummeting sales amid a sharp decrease in the number of Chinese tourists, who had swept cosmetics and other products off shelves until Beijing imposed an unofficial ban on group tours to Korea last year.

Industry sources estimate the measure will cause Korean duty-free operators to suffer an annual loss of 4 trillion-5 trillion won.

A local economic research institute recently predicted the Korean economy’s damage from China’s retaliatory moves would total 8.5 trillion won this year alone, dragging down its growth by about 0.5 percentage point. 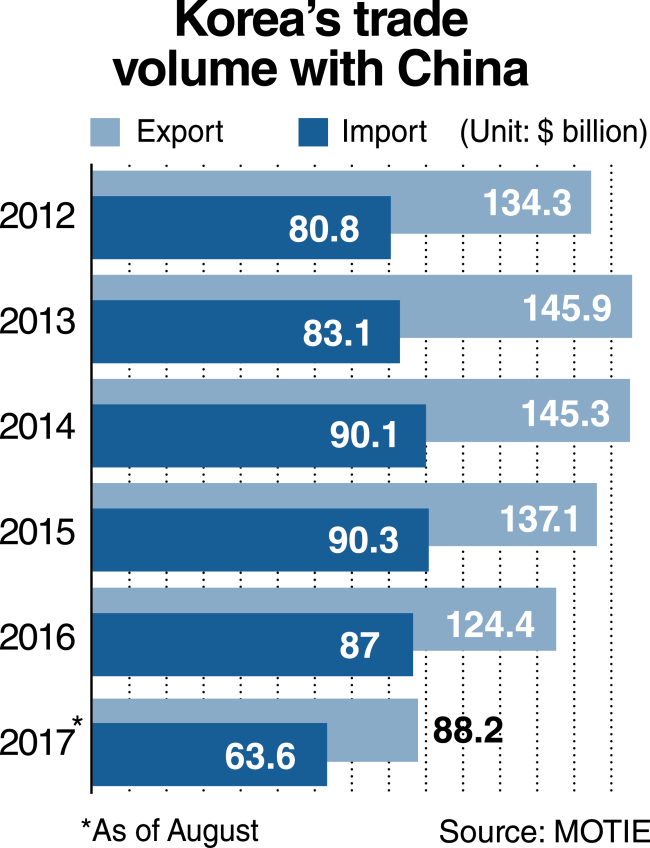 Criticism has been raised that the government remains too cautious to square off with China over the growing pressure on South Korean businesses.

“It goes beyond the ability of each corporation to cope with China’s retaliation regarding the THAAD deployment,” said Kim Hyung-joo, an analyst at the LG Economic Research Institute.

An official at a local business organization, who requested not to be named, criticized the government for making no serious effort to tackle China’s retaliatory moves.

A deputy South Korean trade minister asked for the lifting of such restrictions when he met with China’s commerce officials on the sidelines of a trade fair in the northeastern Chinese city of Changchun last week.

Seoul should persistently raise issue with Beijing’s failure to comply with a bilateral trade accord, which came into force in 2015, at formal bilateral talks, experts say.

They note Korea also needs to be more aggressive in shedding light on China’s moves disregarding international standards on global stages, including the World Trade Organization.

The Ministry of Trade, Industry and Energy now seems preoccupied with pushing for President Moon Jae-in’s election pledge to phase out nuclear power generation than paying heed to hardships faced by South Korean businesses in China.

Concern has also been raised that Beijing may refuse to extend a currency swap deal worth $56 billion with Seoul when it expires in October.

Experts say South Korea needs to ask the US to conclude a swap accord alongside talks on the possible revision of a bilateral free trade pact. It is also necessary for the country to make efforts to reopen a currency swap line with Japan, which was terminated in 2015.

Beijing’s pressure over the THAAD issue is expected to heighten after Chinese President Xi Jinping consolidates his power at the communist party’s congress next month, which will install the leadership to head China for the coming five years.

Xi made a thinly veiled call for the withdrawal of the missile defense system in a message sent to President Moon last month to mark the 25th anniversary of the establishment of diplomatic ties between South Korea and China, hoping to “settle different views in a reasonable manner.”

A Chinese Foreign Ministry spokesman later observed China’s stance against the THAAD deployment is “clear and consistent” and there has been no change regarding it.

Moon’s attempt to buy time through an environmental impact study on the site of the THAAD battery did little to soothe China’s discontent. North Korea’s recent string of provocations have scuttled his approach, forcing him to hasten to the deployment of additional launchers.

Experts say that, despite initial backlash, Seoul should press forward to stifle Beijing’s expectations of South Korea departing from the alliance with the US to go with China.

China is apparently putting pressure on South Korea on the security front in the context of its strategic confrontation with the US, with the previous complementary economic partnership between the two countries being replaced by intensifying competition in global markets.

According to figures from the MOTIE, Korea’s exports to China dropped to a six-year low of $124.4 billion last year as Chinese manufacturers’ dependence on high-tech parts supplied by Korean companies continued to decline.