But critics say sharp pay increases detached from the reality faced by most businesses in the country might drag down the economy.

Complaints are simmering especially from small business owners over last month’s decision by a commission of representatives from the government and labor and management circles to raise the minimum wage for 2018 to 7,530 won ($6.70) per hour, up 16.4 percent from 6,470 won this year.

The increase, the highest in 17 years and more than double the average annual rate of 7.4 percent over the past five years, is seen as the first step toward achieving Moon’s election pledge of pushing up the minimum wage to 10,000 won by 2020.


In a recent meeting with political leaders, Moon hinted at the possibility of easing the pace of the increase.

Moon and his aides assume that minimum wage increases, coupled with other measures to help low-income households earn more, will contribute to boosting consumption and rejuvenating the economy.

The idea of income-led growth may seem appropriate, as the country’s large profitable companies have hoarded cash rather than increasing investment and employment, while households have struggled with stagnant incomes.

But this approach is less likely to be successful if the wage floor is raised at a pace most small companies and self-employed businesses are unable to keep up with, critics say.

Rather, excessive minimum pay hikes could hurt the economy by pushing many small firms and self-employed businesses over the cliff and reducing jobs for low-wage workers, they note.

He suggested that most minimum wage employees work at small companies, which would be forced to cut payrolls to cope with a sharp rise in labor costs.

Many owners of convenience stores, fast food restaurants and other small businesses complain the coming minimum wage hike could make it virtually impossible to keep their shops open.

An association of local small business owners made a request to the Ministry of Employment and Labor on Friday to review last month’s decision.

Small and medium-sized enterprises, many of which are struggling to stay afloat, are also concerned about additional wage costs, which would force them to cut their workforces. 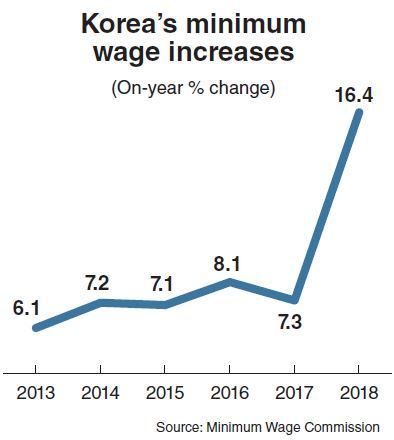 According to the Korea Federation of SMEs, additional labor costs are estimated to reach 81.5 trillion won if the minimum wage rises to 10,000 won over the coming three years as planned by the Moon administration.

A recent decision by a textile company that became the country’s first listed firm to move some of its production facilities to Vietnam deepened worries over the negative impact of raising the minimum wage.

According to a 2016 study by Lee Jung-min, professor of economics at Seoul National University, a 0.1 percentage point increase in minimum wages would result in a 0.15 percentage point reduction in jobs. The total amount of wages earned by workers was projected to begin decreasing when minimum wage rises exceeded 10 percent.

Government data from the period between 1988 and 2013 showed annual economic growth rates were usually lower at times when the ratio of minimum wage to average income was higher.

Experts also note that raising the wage floor would do little to reduce income inequality as many workers on the minimum wage are from middle-class households with more than two breadwinners.

Concern is rising that the number of employers who break the law by failing to pay minimum wages will increase sharply.

An inspection by the Employment and Labor Ministry last year found that nearly 10 percent of 22,161 companies under scrutiny violated the minimum wage law.

The number of workers paid less than the minimum wage more than doubled from 1.44 million in 2006 to 3.13 million last year, constituting 14.6 percent of total employees, according to figures from the ministry.

“The minimum wage needs to be raised but in a more cautious way that minimizes the negative effect,” said Park Ji-soon, professor at Korea University School of Law.

Experts say the pace of minimum wage increases should be adjusted more flexibly rather than adhering to target years, taking into account prices, living costs, productivity, corporate financial conditions and the effect on employment.

It may also be needed to consider differentiating minimum wages among different industrial sectors and regions.

Korea’s minimum wage will still remain below Japan’s national average next year but surpass the level in some Japanese prefectures where lower minimum wages are applied.