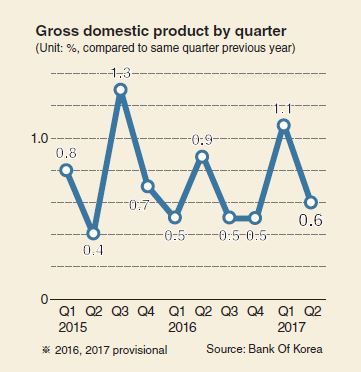 South Korea’s economic growth slackened in the second quarter of this year from a year ago due to slower exports, mainly in shipments of transportation equipment, petrochemicals and chemical products, data from the Bank of Korea showed Thursday.

But demand for semiconductors remained strong.

Meanwhile, consumer sentiment improved under the Moon Jae-in government, with more spending on durable goods, such as home appliances and handsets, but less spending on clothes and shoes.