The central bank revised up its growth outlook for this year to 2.8 percent from the 2.6 percent estimate in April. It cited a rise in exports and facility investment, which is expected to be coupled with a gradual improvement in private consumption in the second half of the year.

In a move that probably drew more attention from analysts, the BOK lowered its projection of the country’s potential growth rate below 3 percent for the first time. 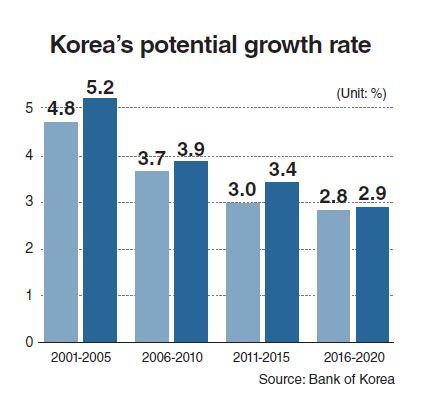 The potential growth rate is the maximum growth an economy could achieve by putting in all elements of production without prompting additional inflation. It is considered a key indicator of a country’s economic fundamentals.

The central bank attributed the country’s weakening growth potential partly to a lack of progress in boosting service industries and a reduction in productivity due to a high regulatory level.

“There are concerns that the potential growth rate may fall at a faster pace than estimated with the rapid aging of the country’s population,” said Jeon Seung-cheol, a deputy governor of the BOK.

Korea’s potential growth rate is projected to fall to 2.4 percent by 2030 and 1 percent by 2050, according to the Organization for Economic Cooperation and Development.

The continuous fall in growth potential would make it harder for the country to increase its gross national income per capita above the $30,000 level, deemed by policymakers and the public as a threshold for entering a club of wealthy, advanced nations. The goal has remained elusive for Korea since its GNI per capita surpassed $20,000 for the first time a decade ago.

“The country needs to focus on bolstering its growth potential rather than sticking to annual growth targets,” said Kim Seong-tae, a researcher at the Korea Development Institute, a state-run think tank.

Economists emphasize the need to enhance productivity by accelerating deregulation and implementing structural reforms, including the overhaul of the labor market.

In this vein, concerns are raised over moves by President Moon Jae-in’s administration to put more restrictions on corporate activity, create a massive number of public-sector jobs and cozy up to labor circles.

Such moves would undermine the competitiveness and efficiency of the Korean economy, weakening its growth potential, critics say.

On the campaign trail, Moon pledged to push for sweeping deregulation to enable the country to adapt to a new wave of industrial renovations.

Since taking office in May, however, he has barely referred to how he will push for regulatory reforms.

He has been focusing on gaining parliamentary approval for a supplementary budget designed mainly to create more jobs in the public sector and shore up the livelihoods of low-income households.

In a Cabinet meeting last month, he expressed regret at objections from opposition parties to the extra spending plan, which he said would help boost the country’s economic growth rate up to 3 percent this year.

While agreeing on the need to implement a supplementary budget especially to ease the rising youth unemployment, economists say its effect would be limited in bolstering the economy.

They note Moon needs to persuade ruling party lawmakers to withdraw their long-held resistance to bills aimed at promoting service industries and setting up industrial zones free of regulations, which were introduced by the previous government under President Park Geun-hye.

Some economists say the idea of income-led growth advocated by Moon and his aides may have some relevance, given large profitable companies have hoarded cash and remained shy of increasing investment and wages, while many households struggle with stagnant incomes.

The approach seeks to expand household income by creating more jobs and strengthening the social safety net, which would lead to boosting domestic consumption and thus invigorating the economy.

The rapidly aging population coupled with a low birthrate poses the most serious challenge the country should tackle to prevent it from being stuck in a low-growth rut.

Korea is set to see its working age population begin to decrease this year.

Over the past decade, it poured more than 100 trillion won ($88.5 billion) into measures designed to raise the fertility rate, which refers to the number of children a woman is expected to have in her lifetime, only to see the figure stand at 1.18 last year, the lowest among OECD member states.