Korea expected to be 15th-largest rice producer in 2017: FAO

South Korea is expected to become the world's 15th largest producer of rice this year, a report by the United Nations food organization showed Sunday.

According to the Food Outlook by Food and Agriculture Organization, South Korea is set to produce 4.1 million tons of rice this year, down 3.1 percent from 4.2 million tons in 2016. 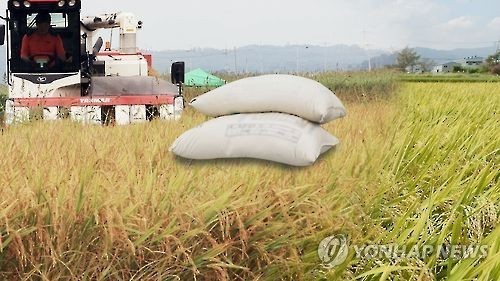 The total should be equivalent to 0.8 percent of all rice to be harvested this year around the world that could reach 502.6 million tons, the report said. Numbers for South Korea are roughly on par with that of Egypt.

The FAO said the No. 1 rice produce this year will be China with 142.3 million tons followed by India with 110.4 million tons. Indonesia, Bangladesh and Vietnam will make up the top five, it said.

The latest findings showed that per capita consumption of the staple grain will stand at 125.5 kilograms worldwide, down from 127.4 kg last year. Numbers for South Korea are estimated to stand at 74.9 kg, compared with 76 kg in 2016.

The FAO then said South Korea's meat production will likely reach a little over 2.5 million tons, while its consumption is estimated at 3.74 million tons.

Asia's fourth-largest economy is expected to import over 1.28 million tons of meat products and export 41,000 tons.

The UN agency, meanwhile, said that the world grain price index will stand at 148 this year up slightly from 147 in 2016. The index is measured on a 100 base mark set for international grain prices from 2002 through 2004. (Yonhap)