The number of employees needed for 1 billion won ($883,000) in gross domestic product fell to a record low of 17.4 in 2016, according to data from the Bank of Korea, Statistics Korea and the Korea Labor Institute.

The figure has declined since 2008, when it first fell below 20.

By sector, agriculture and fisheries created the most jobs at 45.7 per 1 billion won of GDP last year, followed by retail, food and accommodations with 38.4, public health and social service with 29.5 and construction at 28.6.

The manufacturing sector only generated 10.6 jobs per 1 billion won of GDP last year, falling 0.2 from a year prior.

The manufacturing industry in Korea accounted for 31 percent of the nation’s GDP in 2014, the highest proportion among the members of the Organization for Economic Cooperation and Development.

Although the manufacturing sector’s on-year growth hit 4.4 percent in the first quarter of this year, the number of employees in the sector fell by 112,000 during the same period. 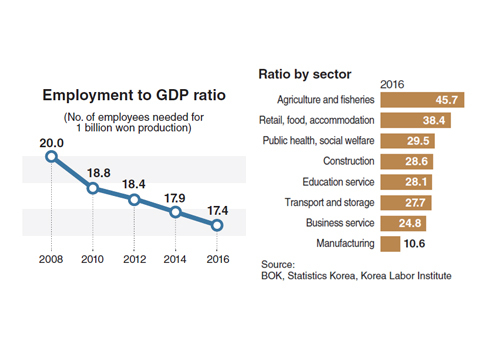 The weakened link between manufacturing and jobs could be attributed to multiple factors, including conglomerates moving their production facilities overseas, more automation in local plants and restructuring in the ailing shipbuilding and shipping industries, according to news reports.

According to data from the Export-Import Bank of Korea, the nation’s total overseas direct investment hit a record high of $35.2 billion in 2016, growing from $23.1 billion in 2007.

Robots are also taking away jobs. Korea ranked No. 1 in terms of the number of industrial robots deployed per 10,000 workers, with 531 robots in 2015, leading Singapore with 398 and Japan with 305, according to the International Federation of Robotics.

Policymakers and economists have repeatedly called for deregulation in the service sector to create more jobs.

BOK Gov. Lee Ju-yeol recently said more jobs should be created in the service sector rather than in manufacturing in order to boost sluggish private consumption, which would in turn enhance people’s income and boost economic growth.

Meanwhile, Korea’s employment rate of seniors aged 75 and over topped OECD members for the fifth consecutive year in 2015, at 17.9 percent. This could reflect wider opportunities for older, eligible workers, but it also represents a weaker social safety net that forces those who are older to continue working, with many in irregular and unstable job positions, think tank Seoul Institute said.