Korea-US trade surplus down 25%, most among major trading partners

Compared to last year’s first quarter, the country’s trade surplus with the US decreased by roughly $1.9 billion or 24.6 percent this year -- the largest drop recorded among America’s 10 major trading partners.

India’s trade surplus with the United States also fell by 11.8 percent, followed by negative figures in Germany of minus 5.7 percent, Italy with minus 7 percent and Vietnam at minus 0.8 percent.

To the contrary, Canada, Ireland, Mexico, Japan and China saw their surpluses with the US increase.

Canada experienced the biggest surge in its trade surplus, recording a 91.3 percent spike this past first quarter, followed by Ireland at 44.1 percent. Mexico, which is tied to the US via the North American Free Trade Agreement, posted a 13.9 percent increase, while Japan and China went up by 2.7 percent and 1.2 percent, respectively.

The rankings for America’s trading partners as of this year’s first quarter had China reigning at the top of the chain at $78.8 billion, followed by Japan at $17.3 billion and Mexico at $16.7 billion. Korea, which had sat at the No. 6 spot last year, dropped two ranks with $6.1 billion. 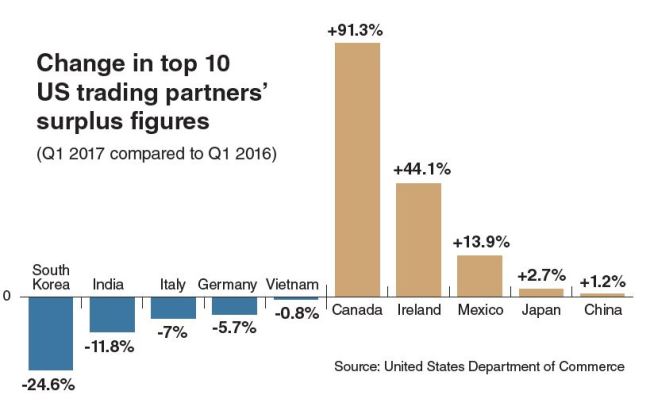 US President Donald Trump, with his “America First” foreign policy, vowed to renegotiate or opt out of international trade pacts in an effort to help claw the world’s largest economy out of its trade deficit and ensure the interests of working-class Americans come first.

“With a lifetime of negotiating experience, the president understands how critical it is to put American workers and businesses first when it comes to trade,” says the White House’s official statement regarding the Trump Administration’s America First policy. “With tough and fair agreements, international trade can be used to grow our economy, return millions of jobs to America’s shores, and revitalize our nation’s suffering communities.”

According to the US DOC, the trade deficit in February this year was $49.9 billion, down 8.1 percent compared to the same period last year. However, despite both America’s overall exports and imports growing by more than 7 percent this year compared to last year, as of March, the deficit continued to deepen.

The US president has publically stated on numerous occasions that he especially intends to renegotiate the current terms of the current Korea-US FTA.

In an interview with Reuters late last month, Trump referred to the trade pact as “unacceptable” and a “horrible deal,” adding that his administration intends to renegotiate the Korea-US free trade pact, following the revision of NAFTA with Canada and Mexico.