By Korea Herald
Published : May 4, 2017 - 14:11       Updated : May 4, 2017 - 16:34
South Korea’s chronic deficit in its services account hit a new high in the first quarter, as Chinese tourists shunned the country in the wake of Beijing’s apparent retaliation against the deployment of a US anti-missile system, the central bank said Thursday.

According to the Bank of Korea, Asia’s fourth-largest economy saw its current account surplus halve to $5.9 billion in March from $10.5 billion a year earlier, mainly due to a widened deficit in its services account and a smaller surplus in the goods account.

These factors led to the first-quarter deficit in the services account, hitting a record quarterly high of $8.9 billion.

The number of Chinese tourists in Korea plummeted by 40 percent on-year to 360,000 in March, according to the BOK. A rise in the number of Koreans traveling overseas also contributed to the deficit in the travel account.

“If the number of Chinese tourists does not return to the previous level, Korea’s travel account will continue to post a deficit,” said Chung Kyu-il, director of BOK’s economic statistics department.

Although tourists from Japan and Southeast Asia increased, this could not offset the fast falling number of Chinese tourists, he added,

“As the number of Koreans traveling overseas keeps rising, the travel account will depend more on the number of foreign travelers visiting Korea.” 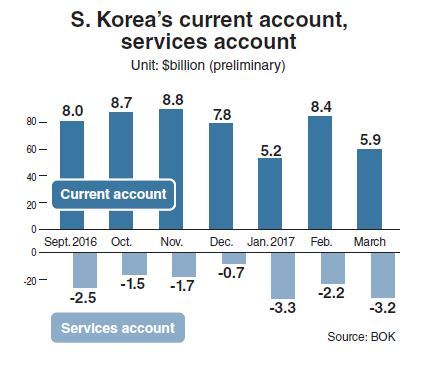 The surplus in the goods account was reduced to $9.8 billion in March from $12.8 billion a year earlier, due to a greater increase in imports than exports.