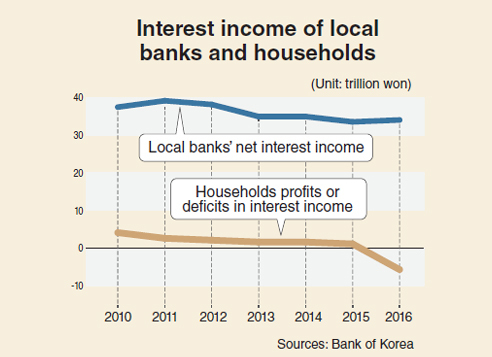 The household net interest income has recorded a deficit for the first time since 1975, while that of local banks has shown an increase last year.

According to the Bank of Korea, total household interest income has decreased to 36.1 trillion won, the lowest in 20 years. However, its interest payments on loans have risen sharply to approximately 41.8 trillion won, creating a deficit of around 5.7 trillion won.

On the other hand, the profits of domestic banks has increased by 900 billion won, resulting in the 34 trillion won in net interest income for banks.

Such a gap between households and banks has been triggered by the increasing interest on loans followed by a decrease in interest on deposits. Financial authorities say they will investigate putting limits on interest rate changes, which were under at banks’ discretion until now, to prevent the gap from widening further.