According to the Ministry of Strategy and Finance, Korea’s national debt hit a record high of 627.1 trillion won ($560 billion) last year, up by 35.7 trillion won from a year earlier. Most of the annual gain in national debt, or 31.8 trillion won, was from the issuance of Treasury bonds.

The ministry said it received the Cabinet’s endorsement on its 2016 settlement of accounts. It plans to get a review by the Board of Audit and Inspection and submit it to the National Assembly by May.

The 38.3 percent national debt-to-GDP ratio was up 0.5 percentage point from a year earlier. The ratio has been on a constant rise from 31 percent in 2010.

The government allocated an extra budget of 11 trillion won last year, when the economy grew only 2.7 percent on-year due to the double whammy of poor exports and weak domestic demand.

“Due to the difficult economic conditions last year, we used an extra budget, which is inversely proportional to fiscal soundness. But in overall assessment, we made a good defense,” said Lee Seung-chul, the ministry’s director general at the fiscal management bureau. 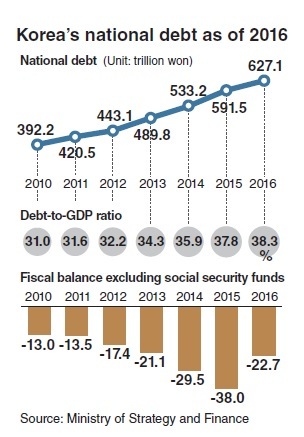 Despite the growth of national debt, government officials said South Korea is at a strong position in terms of fiscal soundness, compared to members of the Organization for Economic Cooperation and Development.

For international comparison, national debt is calculated based on D2, which adds debt at nonprofit state-run agencies to the government debt of D1. When using D2, Korea’s debt-to-GDP ratio ranked as one of the lowest among G-20 nations, marking 42.7 percent as of June 2016, compared to Japan’s 232.8 percent, Italy’s 157.4 percent and France’s 121.1 percent, according to data from the Bank for International Settlements based in Basel, Switzerland.

The Korean government has not yet disclosed D2 data for 2016.

In terms of the consolidated financial balance, which includes the nonprofit state-run sector and pension funds, the nation’s assets reached 1,962.1 trillion won and liabilities amounted to 1,433.1 trillion won in 2016.