Measured response to reduce risks from China, US

By Korea Herald
Published : Mar 6, 2017 - 15:26       Updated : Mar 6, 2017 - 16:23
South Korea is facing the possibility of renegotiating a bilateral free trade deal with the US while coping with increasing economic pressure from China over its planned hosting of an advanced American missile defense system.

Washington on Thursday called China’s retaliation against South Korea “unreasonable and inappropriate” in its first official denunciation of Beijing’s moves to make Seoul pay the economic price for taking a step that it views as undermining its security interest beyond deterring military threats from North Korea.
Earlier on the same day, Chinese authorities instructed local travel agencies to stop sales of all package tours to South Korea. The instruction was the latest in a series of retaliatory measures, which clearly show Beijing’s intention to mobilize all possible means short of outright violation of international trade rules to bring Seoul to its knees.

The US denunciation of China’s unreasonable behavior, meanwhile, was preceded by Wednesday’s release of a report by the US Trade Representative, which indicated President Donald Trump’s administration would seek to renegotiate the trade pact with South Korea.

The accord “has coincided with a dramatic increase in our trade deficit” with Korea, the report said, noting the “time has come for a major review of how we approach trade agreements.”

Concerns have also lingered here that the US may designate Korea a currency manipulator along with China in April, though officials in Seoul downplay such a possibility.

Experts say the country needs to be measured and principled in coping with rising economic pressure from China and the US, which account for more than 23 percent and 12 percent of Korea’s overall trade volume, respectively.

An overly sensitive reaction would particularly play into the hands of China, which seems to believe it has the economic tools to push Seoul to change course on a critical security decision.

China accounted for 25.1 percent of Korea’s exports last year. The proportion rose to 26.9 percent over the first two months of this year, according to data from the Ministry of Trade, Industry and Energy. 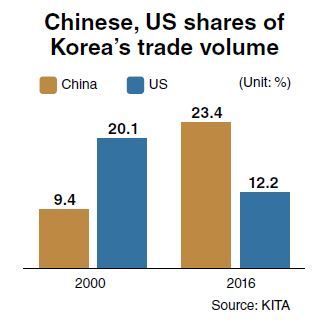 Nearly half of about 17.2 million foreign travelers to the country in 2016 came from China. Tourism officials predict last week’s measure by Beijing would reduce the number of Chinese tourists to Korea by roughly 4 million, doing extensive damage to the local tourism industry.

Beijing may also refuse to extend a currency swap deal with Seoul worth $56 billion when it expires in October and hamper Korean companies from taking part in projects funded by the China-led Asian Infrastructure Investment Bank.

But experts here say that China, for its part, has limits in expanding the scope of economic reprisal against Korea.

“It may be difficult for China to go for a full-scale retaliation as it relies significantly on intermediary goods from South Korea to manufacture key export items,” said Ju Won, an economist at the Hyundai Research Institute, a private think tank.

China may also want to avoid the risk of jobs being lost at about 23,000 businesses run by Korean companies there.

What is also encouraging South Koreans to stand up to Beijing’s pressure is the effective responses by Japan and Taiwan to its previous moves to flex economic muscles in territorial and diplomatic disputes.

Japan and Taiwan have become less influenced by China’s economic clout since their respective rows with Beijing in 2012 and 2016.

Experts say Korea needs to step up efforts to diversify exports markets and attract more tourists from countries other than China.

Such measures are even more necessary, given China will pose far more fundamental risks to the Korean economy in the longer term than retaliatory action in connection with the deployment of the missile defense system.

China is pushing for industrial strategies aimed at catching up with Korea by 2025, Germany and Japan by 2035 and finally the US by 2045 as the world’s leading high-tech manufacturing power. This means China will expand domestic supply chains and sharpen the competitive edge of its products in global markets, reducing demand for Korean goods.

In view of the need to lessen its economic reliance on China, Korea may not be at comfort with a continuous increase in its exports to the world’s second-largest economy.

Korea’s exports to China recorded an on-year increase of 28.7 percent in February -- the highest since November 2010 -- mainly on the back of a sharp rise in shipments of semiconductors, flat panel displays and petrochemical products.

The country’s exports to the US increased by a meager 1.7 percent last month, a figure that seemed far from unsatisfactory for trade officials here, who have vowed to try to reduce the trade imbalance between the two sides.

Experts say Korea may use a possible renegotiation of the trade deal with the US as an occasion to upgrade the bilateral trade relationship, based on the accurate assessment of what the accord has achieved since it took effect in 2012.

A recent report from the Korea Institute for International Economic Policy, a state-funded think tank, suggested the country should prepare for a possible downturn in the US economy down the road, which would in turn weaken the global economic expansion.

“Korea should diversify its export markets and develop high-end goods less susceptible to the business cycle to prevent a slowing US economy from prompting a plunge in overseas shipments,” it said.

Economists also say boosting domestic demand to cut dependency on exports for growth is needed to leave the country less vulnerable to risks from the world’s two largest economies and other external economic turbulences.