The immediate task for the country is to avoid being included in a list of currency manipulators when the US Treasury Department releases a biannual report on foreign governments’ currency policies in April.

Finance Minister Yoo Il-ho said last week there was little possibility that Korea would be designated a manipulator under the current US guidelines.

To the relief of financial policymakers in Seoul, the Trump administration has not yet pointed the finger at Korea, while lambasting China and Japan for devaluing their currencies to gain profits from trade with the US and criticizing Germany for benefiting from a “grossly undervalued” euro.

But experts see Korea as being likely to be the next to be warned by the US, as the Korean won is viewed as being underestimated by about 6 percent against the US dollar.

They raise concerns the country may be pinpointed by the Trump administration as a currency manipulator ahead of other bigger economies unless it exerts all-out efforts to pre-empt such a possibility.

China’s foreign exchange reserve, which reached $4 trillion in June 2014, has fallen below $3 trillion in accordance with its bid to shore up the value of its currency.

Japanese Prime Minister Shinzo Abe seems to have made some success in soothing Trump’s dissatisfaction by pledging Japan’s massive additional investment in the US.

The Japanese yen turned weaker against the dollar in the trading days following the Feb. 10 meeting between Abe and Trump on the expectation the US would become less tough with Tokyo regarding the exchange rate issue.

Finance Minister Yoo had to come forward Thursday to suggest measures could be taken against the ensuing strengthening of the Korean won against the yen. His remarks also resulted in reversing a sharp drop in the won-dollar exchange rate. 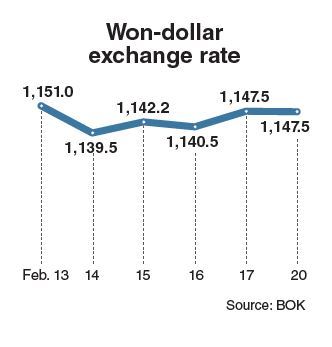 The Korean currency has gained ground against the greenback in recent months, with volatility in the won-dollar exchange rate rising amid concerns over the Trump administration’s policy direction. The average range of fluctuation in the value of the won per dollar widened to 7.7 won a day in January, up 1.7 won from December.

“It is urgently needed to set up an interministerial task force to go all out to prevent the country from being designated a currency manipulator,” said Yoon Dae-hee, a former senior presidential secretary for economic affairs.

Korea was placed on the US Treasury’s currency monitoring list in October along with China, Germany, Japan, Taiwan and Switzerland.

It met two of the three criteria for designation as a manipulator -- an annual trade surplus with the US above $20 billion and a yearly current account surplus exceeding 3 percent of gross domestic product. The third condition is a net purchase of foreign currency greater than 2 percent of GDP over 12 months.

In a letter of protest to the paper, the Finance Ministry and Bank of Korea stressed that the Korean government has not intervened in the foreign exchange market to depreciate the won.

Commentators here were quick to note the article was far from balanced, as it made no mention of the fact China and Japan have accumulated far greater trade surpluses with the US than Korea, while indicating Korea has a current account surplus of nearly 8 percent of GDP, compared to just 3 percent for China and Japan.

Yoo and other Korean policymakers have pledged to increase imports of shale gas and industrial equipment from the US to reduce the bilateral trade imbalance and the country’s current account surplus.

Shin Min-young, an economist at the LG Economic Research Institute, said Korea should mobilize all possible channels and logics beyond commercial ones to lessen the possibility of being designated a currency manipulator. He said the country might need to consider raising its policy interest rate in connection with those efforts.

The Trump administration is reportedly pushing to define practices of currency manipulation as tantamount to illegal subsidies and slap countervailing duties on countries that engage in currency intervention.

Trade sanctions in the wake of designation as a currency manipulator would have a greater impact on Korea relying on exports for its economic growth or survival than China, Japan and other major economies with larger domestic markets, experts say.

They note Korea needs to continue to promote domestic demand especially by eliminating regulations that put barriers to the development of service industries.

“The country now needs wisdom to use the Trump administration’s currency offensive as an occasion to transform its industrial structure,” Yoon said.