In 2016, overseas construction orders clinched by South Korean builders amounted to some $28.19 billion, the lowest since $16.47 billion posted in 2006, according to the data compiled by the International Contractors Association of Korea. 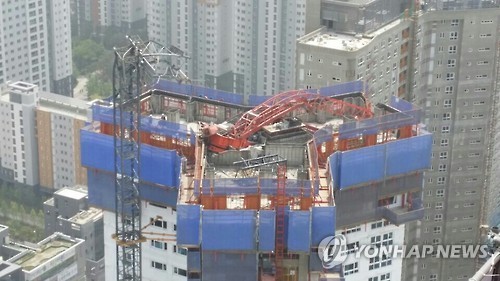 Such a drop was partly attributed to a sharp decline in orders placed by Middle Eastern countries, previously the world's largest market for South Korean construction firms.

Construction orders from Middle Eastern countries had easily accounted for more than 70 percent of all overseas orders won by builders here.

However, in 2016, orders from Middle Eastern countries plunged more than 35 percent on-year to some $10.7 billion won, accounting for only 38 percent of the total, according to the data from the association.

Amid a steady decline in overseas orders, local builders are apparently being forced to shrink their overseas business.

"We cannot entirely give up the overseas section, but also cannot commit a significant amount of resources while the sector is producing little or no outcome," an official from a local construction firm said while speaking on the condition of anonymity.

Already, POSCO Engineering & Construction, a construction affiliate of global steelmaker POSCO and the country's third-largest builder, has either laid off or relocated some 500 workers from its overseas plant department, while GS Engineering & Construction Corp., also a major builder, is relocating its employees from the overseas section to local projects, according to company officials.

Many, however, forecast an improvement in the global construction market this year on a recovery of oil prices.

"The government plans to focus its support for the development of new business models based on self-financing," an official from the Ministry of Land, Infrastructure and Transport said.

"The country will be able to post a positive growth in overseas construction orders this year if our businesses too focus on new and more lucrative business models instead of focusing on simple contract projects," the official added. (Yonhap)