But wary over legal fight with president ahead

By Yeo Jun-suk
Published : Nov 21, 2016 - 17:02       Updated : Nov 21, 2016 - 18:05
Major opposition parties Monday moved to begin impeachment proceedings against President Park Geun-hye, raising pressure on the beleaguered leader who is refusing to quit despite mounting calls for her resignation over a nepotism scandal tied to her long-time confidante Choi Soon-sil.

“The reason why we decided to seek impeachment is that we believe it is the only measure left for the opposition parties and the people to bring the nation back on track,” said Democratic Party leader Rep. Choo Mi-ae.

But the opposition parties have not yet clarified when they will submit an impeachment motion to the National Assembly. 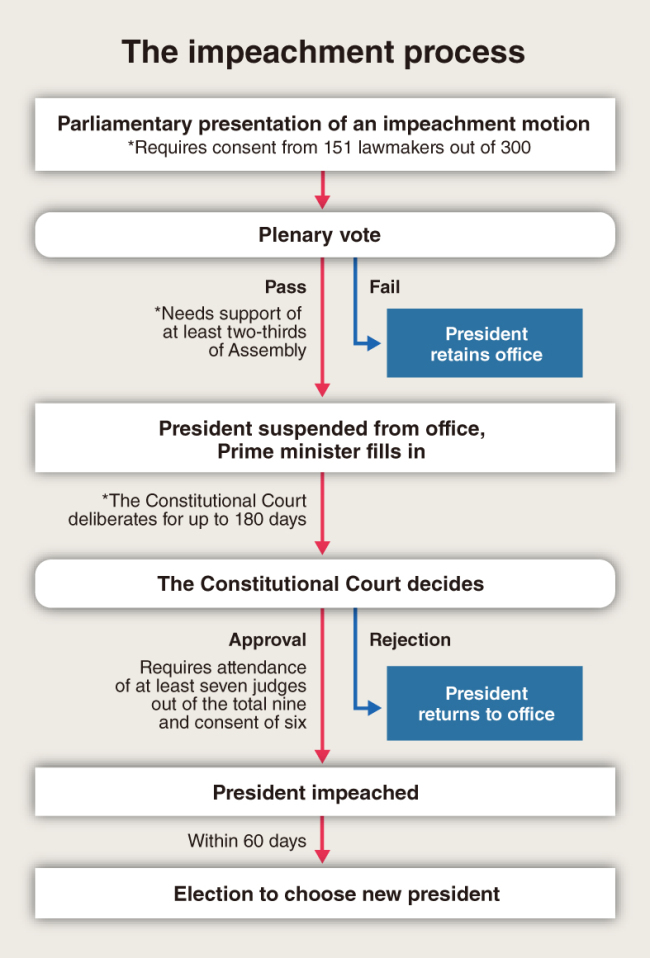 Democratic Party floor leader Rep. Woo Sang-ho said that the party would submit the motion when they “feel confident” about getting it through the legislative hurdle. The passage of the motion requires consent from more than 200 lawmakers of the 300-member National Assembly.

Currently, three opposition parties and liberal-minded independents have 171 votes, 29 short of the required quorum. This means assuming there are no dissenting votes from the opposition bloc, at least 29 lawmakers from the president’s governing Saenuri Party must cast their votes across the aisle.

Though a group of Saenuri lawmakers critical of the president -- such as its former leader Rep. Kim Moo-dung -- have demanded the impeachment of Park, it is still unclear whether they would cast their votes for a motion and how many Saenuri members would join them.

“I think we have to wait and see until we figure out what (the Saenuri members) are talking about. I don’t know whether they would join us in proposing the impeachment motion or agree with us on beginning proceedings for impeachment,” said Woo.

Given that the Assembly law states that the impeachment motions should be put to a secret vote, opposition parties rushed to come up with a measure to ensure that dissenting Saenuri members would vote across the political spectrum.

The People’s Party said Monday that they would launch a campaign to gather the signatures of more than 200 Saenuri lawmakers approving the impeachment.

Democratic Party’s former leader Rep. Moon-Jae echoed the move, saying that the measure can help constituents convince their representatives to join the impeachment and prevent hesitant lawmakers from changing their mind during the voting session.

“We have to make sure that the lawmakers reveal to the public whether they will approve or disapprove the impeachment. If some lawmakers refuse to do that, the voters can protest against their decision and help them change their mind,” said Moon during press conference Monday.

Another concern lingering among the opposition bloc is on the Constitutional Court: Even if the impeachment motion gained bipartisan support and subsequently cleared the Assembly, the measure would eventually be scrapped unless six out of nine judges in the court approve it.

The judges are dominated by conservative scholars appointed by President Park, her predecessor Lee Myung-bak and their governing Saenuri Party. And they are known to have applied strict standards when reviewing an impeachment motion.

The Constitution stipulates that a sitting president can be impeached by the Assembly when he or she is found to have violated the Constitution or other laws.

When the Assembly passed the motion against the late President Roh Moo-hyun and referred it to the Constitutional Court in 2004, the judges rejected the motion for the reason that the allegations were not “grave enough.”

But opposition leaders have noted that the charges facing President Park, who prosecutors say played a key role in the influence-peddling and bribery scandal tied to Choi, is more serious than that of her predecessor Roh, who was subject to impeachment for violating political neutrality.

“If the Assembly passes the impeachment, the investigation result indicating the president’s criminal act is compelling enough to convince the Constitutional Court of delivering a rational decision,” said Democratic Party leader Rep. Choo Mi-ae on Monday.

People’s Party leader Rep. Park Jie-won warned against the possibility that the impeachment motion would face a stricter quorum in the Constitutional Court --  six out of seven judges -- as two of the incumbent judges are to retire early next year

To avoid such a scenario, Rep. Keum Tae-sub, a lawmaker from the Democratic Party, urged lawmakers to seek options to promptly finish the impeachment procedure by Jan 1, 2017, before the two outgoing judges leave office.