President a suspect in Choi case

The investigators said that Park was an accomplice to a substantial share of the crimes allegedly conducted by Choi and two of Park’s former aides, An Chong-bum and Jeong Ho-seong. The three were indicted Sunday on charges such as abuse of power, coercion, attempted fraud and leaking government secrets.

“About the president, the special investigative team decided that she had colluded with Choi in a ‘significant’ part of the crimes by Choi, An and Jeong,” said Lee Young-ryeol, chief of the Seoul Central District Prosecutors’ Office, without specifying which of the charges Park is being accused of. “But due to an incumbent president’s Constitutional privilege that grants an exemption from prosecution, we cannot indict her.”

Lee made it clear that the authorities would investigate the conservative president as a suspect, although specifics of the inquiry are still unclear as it marks the first-ever case of an incumbent president being questioned by the prosecution.

Park is being suspected of allowing her civilian friend Choi -- who is a daughter of Park’s late mentor Choi Tae-min -- to edit presidential documents, siphon public funds via nonprofit organizations and use their relationship for illegal benefits.

Park has denied the allegations and claimed that An and the companies voluntarily helped with fundraising.

“As a lawyer, I cannot accept any part of the prosecution specifying the president as an accomplice,” said Park’s attorney Yoo Yeong-ha, adding that the charges against Park were a result of “pure imagination and speculation.”

“If a certain individual had attempted to benefit in the process of establishing foundations, it has nothing to do with the president. ... She did not know of Choi’s business affairs, and Choi using K-Sports and other organizations for her own gain was beyond her imagination.”

He also denied accusations that the benefits given to Choi and her family had been intended to support Park, after she finishes her term as president.

Yoo said that he has lost faith in the prosecution and vowed not to comply with its request to directly investigate Park, instead he said he would prepare for the investigation by an independent counsel.

Cheong Wa Dae echoed Yoo’s comments, saying that the accusations were groundless, while expressing “deep regret” over the prosecution “claiming that the president had committed a grave felony.”

Investigators had sought to question Park face-to-face prior to indicting Choi before the deadline Sunday, but the president insisted on being questioned the following week.

“Choi and An abused their authority over 53 member companies of the Federation of Korean Industries, forcing them to donate 77.4 billion won ($65.8 million) for the establishment of the Mir Foundation and K-Sports Foundation,” Lee said. He highlighted the irregular nature of the process by saying that the corporations and the amount that they were asked to donate was decided in just one week, and that the sum increased from 30 billion won to 50 billion won for no apparent reason. 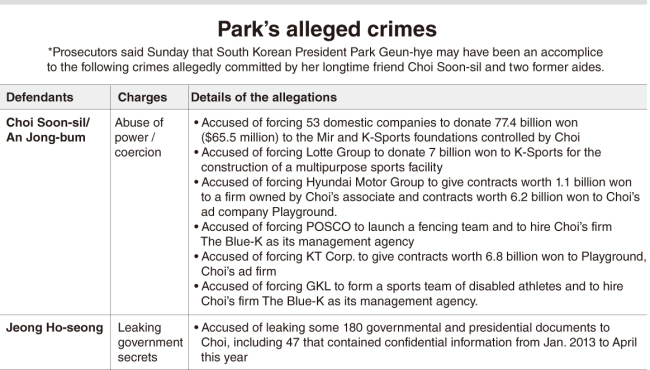 It has been revealed that Park convened a private meeting with heads of the seven biggest companies in the country, including Samsung, Hyundai Motor, LG, SK, CJ and Hanhwa, during which she is suspected to have urged them to participate in the fundraising. The investigators had summoned the company chiefs for questioning.

But while the arraignment said that the companies were made to feel that there was “no choice” but to give out the money, there has been suspicions that the donations were made in exchange for favors. Samsung Group in particular is suspected of contributing up to 5 billion won to the Choi family in addition to a 24 billion won donation it made to the two foundations, the biggest for any Korean firm.

Choi and An have also been accused of attempting to coerce a company that acquired advertisement company Poreka, formerly an in-house firm of Posco, to give up the company to Choi’s associate Cha Eun-taek. Cha, formerly a prominent TV commercial director, has been arrested and is being investigated for charges including attempted coercion and embezzlement, as is former Korea Creative Content Agency chief Song Sung-gak.

The prosecution acknowledged Choi and An forcing Lotte Group to donate 7 billion won to the K-Sports Foundation, while coercing Hyundai Motors Co. to seal deals worth 6.2 billion won and 1.1 billion won with companies owned respectively by Choi and her acquaintance.

Jeong has been indicted on allegedly leaking to Choi 180 documents related to the president, including personnel details on high-ranking government officials, documents related to diplomatic matters and her overseas tour, and her speeches at Cabinet meetings and senior secretarial meetings. This also included 47 “clearly classified” files, such as data related to appointing new ministers and vice ministers.

Recordings of his conversations with Park uncovered on his phone showed that he was acting under direct orders from the president. One of the files even showed the president urging Jeong to receive confirmation from Choi, whom she called “teacher.”

Prosecutors continued to close in on those around Park and Choi by requesting an arrest warrant for Choi’s niece Jang Si-ho, who is suspected of coercing donations from Samsung Group to the Korea Winter Sports Elite Center that she founded. Jang is also accused of pocketing part of the funds.

An arrest warrant for former Vice Culture Minister Kim Chong, who is believed to be Jang’s accomplice, has already been requested.

The prosecution, however, left out the bribery charges for any of the accused. There have been calls to include bribery under the charges faced by Choi, and possibly Park, for their alleged benefit from raising tens of billions from local corporations.

“We only specified charges that we can prove in the arraignment,” said an official from the prosecution. Officials did not rule out the possibility of pressing additional charges of bribery in relation to the scandal.

Minor opposition People’s Party said via a statement that the prosecution should have specified Park’s role, urging the president to step down.

“The reason they (the prosecution) left out the bribery charges I think it is because the president did not comply with the investigation but hindered the process. ... In order to prove that (Park and Choi) conspired, the prosecution should investigate the principal offender Park and press additional charges,” said the party’s interim leader Park Jie-won.

Moon Jae-in, a former leader of the main opposition Democratic Party of Korea, claimed that there are sufficient legal grounds for Park’s impeachment and urged her to step down.