It is the first time ever that Naver’s quarterly earnings have surpassed 1 trillion won, the company said in a regulatory filing. 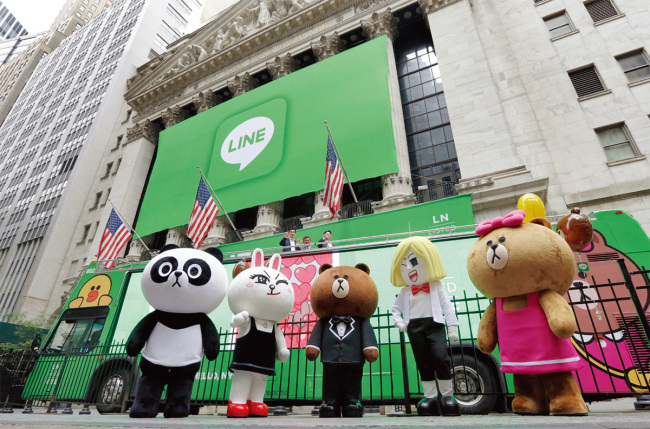 In the July-September period, Naver’s operating profit surged 27.6 percent from a year earlier to 282.3 billion won. Its consolidated net profit came in at 198 billion won, up 69.5 percent on-year.

The Korean web portal operator attributed the sharp increase in its third-quarter earnings to high growth in its overseas sales, mostly generated by its mobile messenger app Line, as well as mobile advertisements.

The Japan-based Line Corp., a subsidiary of Naver, is the operator of Line, which boasts some 218 million monthly active users. Its core markets are in Asia, with Japan, Taiwan, Indonesia and Thailand accounting for more than two-thirds of Line’s total market.

Around 88 percent of Naver’s content business revenue is generated overseas, according to the Korean internet giant.

“We will continue to invest in new technologies, expand partnerships with diverse partners and recruit more talented individuals to drive up our technological competitiveness in the global market,” Naver CEO Kim Sang-hyun said in a statement.

In the first nine months of the year, Naver’s total sales reached 2.94 trillion won, while operating profit came in at 812 billion won and net profit at 576.3 billion won.

Shares of Naver rose 1.3 percent from the previous trading day to close at 859,000 won Thursday.