The country’s financial authorities thus need to keep a close watch on the potential risk, which could come as a drag on the local financial sector, the Korea Institute of Finance said in the report on household debt.

According to the report, the debt-to-income ratio for 20-somethings jumped to 174 percent as of end-May 2016 from 112 percent seven years earlier. The comparable figure for sexagenarians spiked to 287 percent from 208 percent. Their increase rates were much higher than the overall 53.5 percentage-point gain for self-employed borrowers. 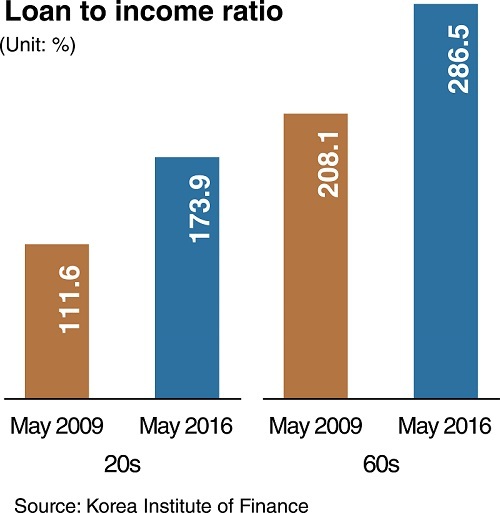 A gauge of consumers‘ ability to repay debts, DTI refers to the percentage of their monthly gross income that goes toward paying debts.

The institute attributed the higher DTIs to the country’s high youth unemployment and an increase in the number of people in their 60s among baby boomers.