South Korea’s trade surplus with China halved in three years, with the nation’s shipments to the neighboring country also falling for the 15th consecutive month in September, data showed Friday. 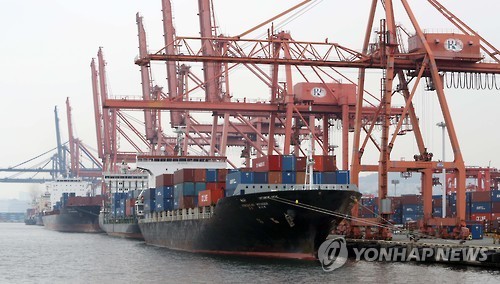 Exports to the country’s largest trading partner stood at $10.96 billion last month, a 9 percent decrease from $12.04 billion tallied in the same month last year, continuing to decline for the 15th consecutive month, according to data from the Korea International Trade Association (KITA).

The 15th straight month of decline is the longest losing streak since June 2015, when exports to China fell for the 11th straight month. The country’s overall exports fell 5.9 percent on-year to reach $40.9 billion in September.

“China takes up about 25 percent of South Korea’s total exports. The continuing decline in exports to China indicates that the country will have a difficult time in recovering its sluggish exports that began in January 2015,” Cho Bit-na, a researcher with KITA, told The Korea Herald on Friday.

Cho and other experts attributed the decline to China’s slowing economy and its own weak exports.

The Bank of Korea last week predicted that exports with major trading partners including China will improve in 2017 as the global economy is expected to recover.  However, fundamental changes in the Chinese economy contributed to a decline in South Korean exports to the world’s second-largest economy, experts said.

China has been trying to promote domestic consumption by boosting the supply and demand of its domestic brands. The country’s attempts may have lessened the need for Korean products, local experts said.

“While 70 percent of Korea’s exports are intermediary goods, China’s competitiveness of products such as semiconductors and display panels have improved a lot,” Cho said.

Local experts including Cho called for a new strategy to boost exports.

With the decrease in exports to the world’s second-biggest economy, the proportion that China makes up in South Korea’s total exports also dropped from 26 percent to 24.7 percent, according to data from KITA.  Instead, Vietnam is now boosting its proportion of South Korea’s total exports, as many South Korean companies are moving their production facilities from China to Southeast Asian, citing increasing labor costs in China.

Vietnam, which became the third-largest importer of South Korean products, offers favorable foreign direct investment policies while labor costs are lower than in China. South Korea exports to Vietnam jumped 16.9 percent to $2.79 billion in September, data showed. Exports to Vietnam doubled over the past five years.