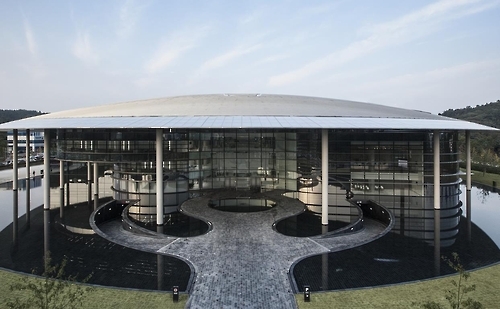 At Technodome, Hankook Tire will develop future technology integrating eco-friendly materials, new materials, and simulation technology as well as networking technology, the company said. The country’s largest tire-maker invested a total of 266.4 billion won ($235 million) to build the R&D center over the past two years.

The company currently operates overseas R&D centers in Germany, China, Japan and the US to focus on developing tires tailored to each of the market’s climate and road conditions. Technodome is designed to oversee the company’s research network around the world and focus on developing original and future-oriented technologies, officials said.

While the cutting-edge center is considered the manufacturer’s expansion of business strategy, the company played down speculation of aggressive mergers and acquisitions. Its rival Kumho Tire is currently looking for a new controlling stakeholder.

“It is unlikely that (such an) acquisition would get a green light due to Monopoly Regulation and the Fair Trade Act,” said Cho Hyun-bum, the company’s chief marketing officer and chief corporate management officer.

“Besides, considering our globalized portfolio, there would not be much benefit (in acquiring Kumho Tire).”

The facility boasts 10 research buildings under one dome with an auxiliary residential building, spanning a floor space of 96,328 square meters.

It received a gold certificate of LEED by the US Green Building Council, one of the most prestigious green building certification system.

The total sales of Hankook Tire is expected to be lower than its original forecast of 7 trillion won in 2016, as lower prices of materials have weighed on tire prices, but its net profit should still reach the target of 1 trillion won, backed by the growth in sales, Suh said. Hankook Tire’s R&D investment account for 2.3 percent of the total sales.

Hankook Tire is the world’s seventh-largest tire-maker in terms of total sales and the fifth in total production.