[Chung Kwan-joo] King Sejong Institutes: Reaching Out to the World

With Korean Language and Culture 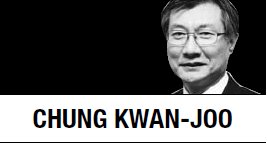 Earlier this month, the eigth Korean Educators Conference was held at the National Museum of Korea. It brought together instructors teaching Korean at King Sejong Institutes around the world.

One of them was Linda Stockelova, who teaches at the King Sejong Institute in Prague, the Czech Republic. As a teenager, she loved watching Korean movies, which led her to major in Korean studies. She said she was proud that some of her students were admitted this year into the department of Korean studies at Charles University, a leading university in the Czech Republic.

Lkhamtseren Erdembaatar at the King Sejong Institute in Ulaanbaatar, Mongolia, said he decided to become a Korean language teacher after watching a Korean drama that portrayed the country’s tradition and decorum as well as economic development. All participating teachers at the Conference seemed to be proud of promoting the Korean language and culture.

The mission of the King Sejong Institute is to promote the Korean language and culture overseas. In 2007, 13 institutes were opened in three countries; the overall number has increased more than tenfold to 143 in 57 countries. The accumulated number of students is expected to exceed 200,000 this year. Recently, there is a growing demand for Korean thanks to Korea’s economic growth and the effect of the Korean Wave represented by K-Pop and dramas.

The competition rate to enroll in the King Sejong Institute in Tehran, Iran, was four to one. The King Sejong Institute in Moscow has attracted some 4,000 students annually, leading it to hold entrance exams. In addition, the number of test takers of the Test of Proficiency in Korean has surged from 2,700 in 1997 to more than 200,000 in 2015. All this attests to how the status of Korea and Korean has changed.

The demand for Korean is the foundation sustaining the Korean Wave. An interest in culture can be momentary, but learning the language will create an enduring interest in the country. Learning the language leads to a deeper understanding, opening the door to greater access to culture and forming favorable views of the country. With this recognition, some advanced countries have worked hard to promote their language and culture through language institutes, including Alliance Francaise and the Goethe-Institut.

This is in response to an increase in the number of non-Korean students who are taking Korean language courses at the Korean Education Centers, which were originally designed to teach ethnic Koreans living abroad. With the integration of Korean language courses, it is now possible to effectively provide customized education according to the demands of students. It is also possible to increase the quality of teaching by unifying training and teaching materials.

The Ministry of Culture, Sports and Tourism plans to strengthen support for the King Sejong Institute. It intends to increase the number of professional Korean language instructors dispatched to the Institutes and step up the re-education of instructors. It also aims to develop more interesting teaching materials that feature Korean cultural content, conversation and mobile content.

The King Sejong Institutes are “a small version of the Korean Cultural Centers” that are reaching out to the world with Korean and Korean culture. The Ministry intends to further expand their role and elevate their quality so that they can join the ranks of Alliance Francaise and the Goethe-Institut. I hope that more overseas students of the Korean language and culture will learn to communicate in Korean and achieve their dreams through the King Sejong Institutes.

Chung Kwan-joo is the first vice minister of culture, sports and tourism. -Ed.