The Ministry of Environment will hold a hearing for its final decision on the punitive measure on July 22. Of the 32 Audi and Volkswagen models subject to the penalty, 27 models are currently on sale.

Following the decision, the Korean unit could face sales ban on its top-selling models such as the Volkswagen Golf and the Audi A8, together with the hefty penalty. 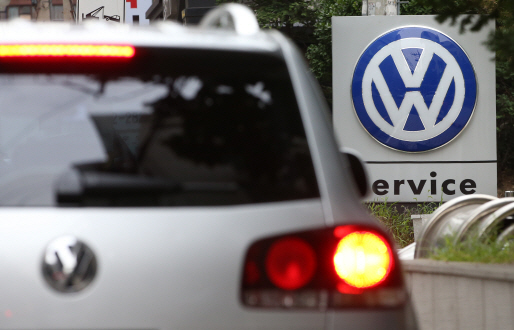 A tricky issue is the date of the decision. Under the revised law that takes effect on July 28, the maximum amount of fine for submitting false emissions documents will increase from the current 1 billion won to 10 billion won for each car model.

If the ministry decides to implement the law first on VW vehicles, the total penalty could surge from 32 billion won to up to 320 billion won.

“We are debating over legal implications because the revised law coincides with the enforcement date of the penalty,” an official at the ministry said. “We will sort out the car types and models that are under the administrative measure and will announce the decision latest by July 29.”

Earlier this year, Korean prosecutors opened an inquiry into the German carmaker’s emissions-rigging scandal that came to light in 2015. After a five-month investigation, the authorities discovered that VW had indeed circumvented local emissions control systems in several models including the Audi RS7, Audi A8, Golf 1.4 TSI and the Golf 2.0 GTD.

South Korean customers have filed class-action suits against VW for compensation, but the German carmaker has refused, saying there are no legal grounds for it to do so. According to current environmental laws, VW can recall the problematic cars to fit them with upgraded software. In addition, the company has pledged to donate 10 billion won as a part of its corporate social responsibility program here.

Customers are still resisting the decision, saying the carmaker reached a US$14.7 billion compensation deal with drivers in the US on the same emissions cheating.

The prosecutors have arrested an executive of VW, identified by his surname Yoon, in June on charges of fabricating private documents and obstruction of justice. On July 8, former VW Korea managing director Park Dong-hoon, who is currently sales chief of Renault Samsung Motors, was summoned again for questioning regarding the carmaker’s emission-cheating. The prosecutors said they will soon summon the current VW Korea chief Johannes Thammer to question him over his involvement in the snowballing case.