The good, the bad, the difficult 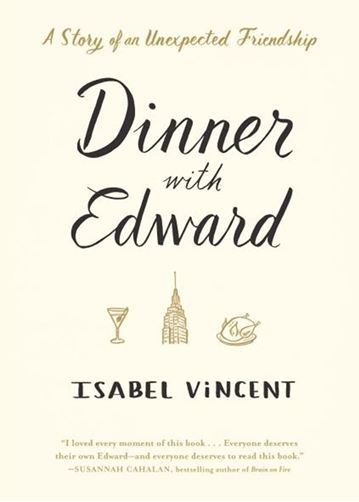 Isabel Vincent's marriage was on the verge of ending when a friend introduced her to Edward, a man whose wife had just died. The attraction was immediate. What followed was not a romance -- Isabel was in her 40s, Edward in his 90s -- but a close relationship that can only be called love.

In her memoir, “Dinner With Edward,” Isabel -- a hard-nosed, hard-boiled investigative reporter and former war correspondent -- tells a delightful story of how this friendship unfolded over lavish gourmet meals prepared by the flamboyant Edward in his New York apartment.

It might be Isabel’s growly hard-news background that keeps this book from becoming sweet: Even as she includes menus, cooking advice and beauty tips from Edward (More lipstick, darling! More form-fitting dresses!) the book doesn‘t go soft. She tells the good, the bad and the difficult, all with an unsentimental but deeply empathetic understanding of Edward, his beloved wife, their nearly 70-year-marriage and his new, diminished life.

The book is a fast, light read, but it is made poignant by the understanding that Isabel’s life is still on an upward swing -- things get better, she finds love, she begins to move on -- while Edward is heading toward his slow decline. (TNS)