‘Hamilton: The Revolution’: How a hip-hop Broadway musical became an American obsession 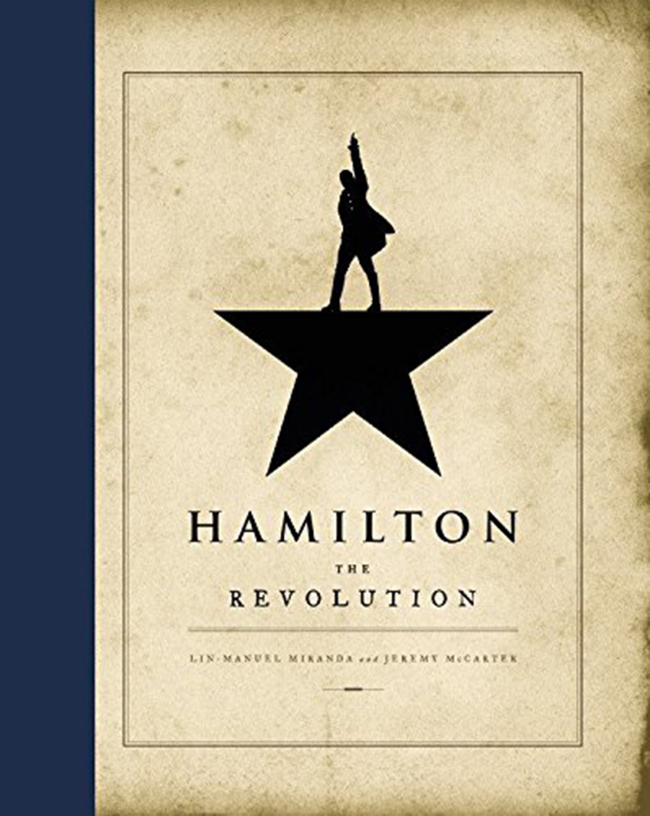 By Lin-Manuel Miranda and Jeremy McCarter

The revolution started with the idea that a hip-hop-Broadway marriage was the perfect vehicle for the story of Alexander Hamilton, the $10 Founding Father who created America’s monetary system. The genius who came up with the idea and executed it to groundbreaking, earth-shaking, money-making success is Lin-Manuel Miranda, so it should come as no surprise that he gets “Hamilton” in book form as right as he does everything else.

Miranda employed The Roots to produce the album of the Pulitzer Prize- and Tony Award-winning musical to chart-topping and Grammy success. For the book “Hamilton: The Revolution,” he embraced as his collaborator Jeremy McCarter, a former critic and head of Public Forum, a series at New York’s Public Theater centered on politics, media and the arts. McCarter conducted interviews and wrote the text, and Miranda provided detailed footnotes side by side with the amazing libretto that has revolutionized Broadway.

Many of the notes include inspirations and the perspiration over six years to find the words to do the Hamilton saga justice and the performers to pull off the conceit of people of color in the roles Washington, Jefferson, Madison -- everyone except King George III. For instance, Miranda cast himself as Alexander Hamilton and Daveed Diggs, an actor-rapper, as Lafayette and Thomas Jefferson, who in a rap battle scene gets the tongue-twister, “If Washington isn’t gon’ listen / To disciplined dissidents / This is the difference.”

“Having Daveed gave me the confidence to write this intricately,” Miranda writes, noting that the section was inspired by Kendrick Lamar, “the master of these polysyllabic gems.” It didn’t always go as planned. Amid the lyrics for “The Room Where It Happens” is the footnoted instruction, “The company screams in chaos.” Miranda’s note says he asked cast members to scream the name of one of America’s original colonies, but “they kinda shout whatever they want.”

The book’s design, by Paul Kepple and Max Vandenberg, is a cross between a beautifully bound historical reference book with parchment pages and a coffee-table book with full-page photographs and photo spreads from onstage numbers and behind-the-scenes moments. They bring into focus Paul Tazewell’s award-winning costumes and encounters with the Obamas, among other key moments before the juggernaut that is “Hamilton” took hold. The book includes profiles of key cast members and interviews with and shout-outs to people who influenced the show -- from biographer Ron Chernow to the musical stylings of Ja Rule.

Of Leslie Odom Jr., who plays Hamilton nemesis Aaron Burr, Miranda’s description includes words such as “cool” and “elegant.” “Dude makes me look scruffy,” he says admiringly. Odom came to the show via Carnegie Mellon University and NBC's “Smash,” and he beat out his boss for the Tony Award for best actor in a musical. Another chapter is dedicated to the CMU alum and Tony winner who plays Hamilton’s sister-in-law, the feisty Angelica Schuyler. It is titled: “On the Perfect Union of Actor With Role, With Allusion to Renee Elise Goldsberry.”

Some chapters are presented with themes ripped from Hamilton‘s troubled life, such as “The Grieving Chapter: On Losses Beyond Words,” or on the life of the show, such as “By Which It Will Appear That Good History Makes Good Drama, and in Which Sebastian Miranda (Lin-Manuel’s son) Makes His Debut.”

It‘s said that “Hamilton,” the show, contains 24,000 words. The book, at 287 pages, contains Miranda’s words and an inside look at how they came to be and the fireworks that followed. At one point in the musical, Angelica Schuyler, as Hamilton’s future sister-in-law, sings, “You want a revolution, I want a revelation.” “Hamilton,” the book, has both. (TNS)