Injured Korean golfer Park In-bee will announce her status for the Rio de Janeiro Summer Olympics when the field is finalized next week, her agency said Wednesday.

Galaxia SM said the world No. 3, who has been battling a left thumb injury, resumed training last week. Park isn't playing at this week's U.S. Women's Open, the third major of the LPGA Tour season. 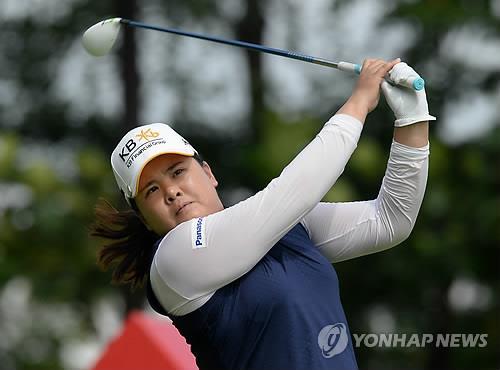 Park's availability for the Aug. 5-21 Olympics has been in limbo, but the Seoul-based agency said Park is still very much determined to represent the country. Her final call will be made next Monday, when the Olympic golf field will be set based on the latest world rankings.

"She's training with her eyes set on the Olympics," it said.

"Her thumb has healed thanks to an extended break, but she could still feel some pain after a lot of movement."

The world's top-15 players on the world rankings as of next Monday will be eligible for Rio. There is a limit of four players per country, and on the current rankings, South Korea had seven players among the top 15.

Park has slipped a notch to No. 3 this year while battling injuries, but she is still the top-ranked South Korean. She's followed by No. 5 Kim Sei-young, No. 6 Yang Hee-young and No. 9 Amy Yang.

Given the little separation among Yang, Jang and Ryu, any of the three could potentially secure an Olympic berth with a strong showing at the U.S. Women's Open in San Martin, California.

If Park decides not to compete in Rio and the ranking positions don't change, then Jang, a two-time LPGA winner this year, will be the first alternate.

Park, who is winless in 10 starts this season, with two missed cuts and three withdrawals, hinted at pulling out of the Olympics last month, saying a healthy player should take her place if she isn't well enough to compete.

Galaxia SM said it is premature to say at the moment whether Park can go to the Olympics, but she wants to make the call by next Monday at the latest so that her alternative could prepare for the Olympics.

Park, who was slowed by back problems earlier in the season, has also pulled out of the July 19-24 International Crown, an international match play competition. (Yonhap)