By Seo Jee-yeon
Published : Jul 5, 2016 - 16:49       Updated : Jul 11, 2016 - 17:20
[DECODED] The corporate board of Hyundai Motor, the top decision-making body for the nation’s largest automaker, has made improvements in its shareholder-friendly policies for the past few years by raising dividend payments and setting up a sub-committee for better communication with shareholders.

The nine-member body, however, has made little progress in upgrading the quality of itself, idling from its core “watchdog” role for better management decisions. 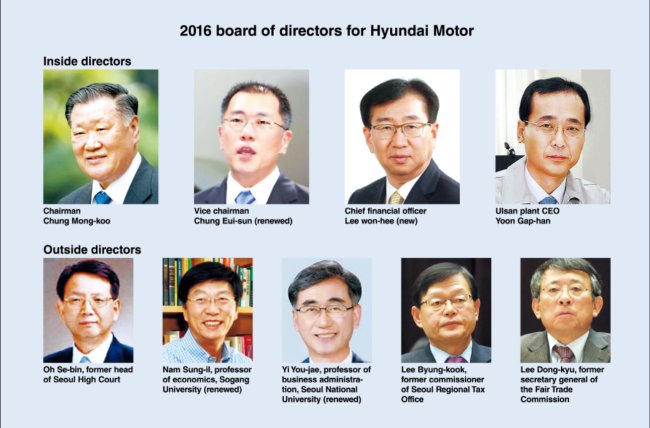 The automaker’s governing body has been under pressure to reform since its board of directors, including five outside directors, unanimously approved the company’s $10 billion (10.55 trillion won) spending on purchasing land in Seoul’s affluent Gangnam district for the relocation of group’s headquarters with its two sister firms-Kia Motors and Hyundai Mobis-in September 2014.

The overvalued deal, pushed by Hyundai Motor Group chairman Chung Mong-koo, dealt a blow to the stock price of Hyundai Motor, raising doubts among investors over the firm’s governance structure.

The company’s first quarter report submitted to the financial authorities showed that none of the outside directors said “no” to management decisions at the five board meetings in the first three months of this year.

The management decisions approved by the outside directors in that period varied from the 2016 business plan to the appointment of a new CEO and a stock buyback plan.

Dysfunction of outside directorship

The malfunction of the outside directorship system in Korea is a chronic issue related to corporate governance here.

Under the Korean commercial act, a conglomerate whose assets exceed 2 trillion won has to run a committee to recommend outside director candidates under its board.

As corporate executives are allowed to be members of the committee, outside director positions tend to be filled by candidates favored by management, the professor pointed out.

Hyundai Motor has no exception in this trend. Among the carmaker’s five outside directors, three are former government officials who have lack of experience in corporate affairs and management.

“While Samsung Electronics favors ex-ministers for outside directors, Hyundai Motor prefers officials from the supervisory bodies, including the Fair Trade Commission and tax authorities,” Park said.

Even the remaining two outside directors are professors who were under fire for giving the green light to the controversial land purchase deal.

“The profiles of outside directors at Hyundai Motor hint what kind of issues the company face,” an industry insider said on condition of anonymity.

“Simply put, the current outside board system isn’t working. This is why the role and intervention of institutional investors like the public pension funds in the reform of corporate governance has recently been highlighted,” professor Kim said.